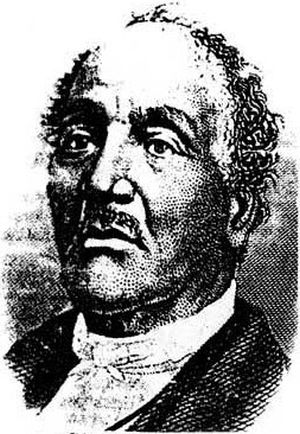 Bishop William Paul Quinn was the fourth Bishop of the African Methodist Episcopal (AME) Church. He was instrumental in establishing several AME churches in U.S. midwestern states during the pre-Civil War period.  His work for the black Methodist community was highly regarded.  That work included starting new churches in the Midwest and working with the Underground Railroad.  Bishop Quinn served as the senior bishop of the AME church for nearly 25 years, making him the longest presiding bishop in the church until his death in 1873.

Although there is some uncertainty about the details of Quinn’s parentage most sources list him as having been born in Hindustan, near Calcutta, India. According to his own account, he was born on April 10, 1788 and was of Indian descent.  His family was wealthy from mahogany trading but when Quinn was introduced to the Christian faith by Mary Wilder, a Society of Friends evangelist visiting from England, he was ostracized and sought refuge in England where he adopted an anglicized name. He later arrived in New York around 1806 and became a member of the Hicksites, a Quaker sect founded by Elias Hicks. The sect was known for its activist role in antislavery movements.

From there, he moved to Long Island, then New Jersey and finally Maryland where he converted to the Methodist faith in 1808. Quinn was licensed to preach as a Methodist minister in 1812. Four years later he was one of the founders of the AME denomination when it was formally organized in Philadelphia, Pennsylvania in 1816.  Between 1816 and 1835 Quinn was the pastor of small churches in New Jersey but in 1836 he was assigned to the “Western Mission” and for the next eight years he served as an AME missionary traveling by horse and preaching the gospel to African Americans from New Jersey to Missouri.  His name also became commonly associated with Underground Railroad activity, as he helped to establish black churches in Kentucky, Indiana, and Missouri.

Bishop Quinn preached to black and white Methodists but his work was mostly with AME congregations. The AME Church credits him with spreading the faith among both free blacks and slaves especially in Kentucky and Missouri.  Partly as a reward for his service to the Church, Quinn was elected bishop on May 19, 1844 at the denomination’s general conference in Philadelphia. He was 56.  Five years later, in 1849, he succeeded Morris Brown as senior AME Bishop and held this position for nearly 25 years. During this period he presided over the growth of the Church and in particular, the establishment of 47 AME congregations from Pittsburgh, Pennsylvania to San Francisco, California.  Among those congregations were AME churches in the Reconstruction-era South.

In 1872, the AME Church in Texas founded a college in Waco intended to educate former slaves.  They named it Paul Quinn College.  A number of AME churches were also named after the former missionary turned bishop. Bishop Quinn was married to Mary Jane Quinn. He died in Richmond, Indiana on February 21, 1873 at the age of 85.