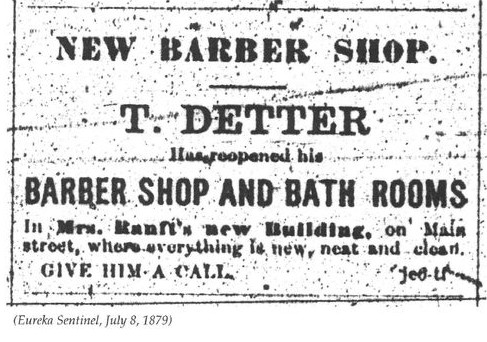 Thomas Detter, late 19th century black businessman, Methodist minister, and civil rights advocate, was one of the first black literary figures to emerge in the U.S. West. The son of a free stonemason, Detter was born near Washington, D.C. around 1830. Very little is known about his childhood. He arrived in San Francisco in 1852 around the age of 22 where he owned his first barber shop. Detter soon established himself as a community leader and civil rights advocate. He served as the Sacramento County delegate to the first Colored Citizens of the State of California Convention and was later named to the organization’s State Executive Committee. He also campaigned throughout the West for the causes of public education, voting rights, and admitting testimony by African Americans in court.

In 1859, after some success in California, Detter spent the next three decades living in gold and silver mining communities in Washington and Idaho Territories and in Nevada during its early days of statehood. He resided for a time in Lewiston, Bannock, and Idaho City in Idaho Territory and Walla Walla in Washington Territory. In these isolated frontier settlements, he worked as a barber, owned bathing houses, sold cough syrups and hair restoratives, gave public addresses, and between 1863 and 1875 published thirty-six articles as a correspondent for two San-Francisco-based African American newspapers The Pacific Appeal and The Elevator.

Detter moved to the mining town of Elko, Nevada in 1871 shortly after it was founded in 1869. It was in Elko that he published Nellie Brown, or The Jealous Wife, with Other Sketches through a San Francisco printing firm. A collection of short stories and non-fiction pieces, Nellie Brown was ignored for many years, then rediscovered in the late 20th century, and is now regarded as one of the first works of fiction written by an African American in the U.S. West. More than just a literary artifact or curiosity, the collection has much to say regarding 19th-century American society, politics, and literature.

Nellie Brown explored topics that were widely popular at the time of its publication, including divorce, jealousy, and immorality. Detter’s book extended the 19th century African American literary tradition to the West and contributed to the development of American divorce fiction.

The book also afforded Detter the opportunity to explore the political and civil rights status of African Americans in the West during this period immediately after the Civil War. He was an early and forceful advocate of full civil rights for blacks in the West and across the nation. Much of that advocacy came from residing in the small towns and mining communities of Washington, Idaho and Nevada. In the short non-fiction sketch titled “Boise City,” he describes the capital of Idaho Territory as a place where “many of its citizens are afflicted with the terrible disease of Negrophobia… A respectable colored man can scarcely get accommodations at any of the hotels or restaurants.”

By 1876 Detter had moved to Eureka, another fledgling Nevada settlement, where he met and married Emily Brinson. He remained in the city for the next decade and in 1884 represented the African American population of Nevada at the World’s Industrial and Cotton Centennial Exposition in New Orleans, Louisiana. Economic pressures and the dissolution of his marriage to Emily Brinson compelled him to relocate yet again, this time to New Orleans, where he died in 1891.