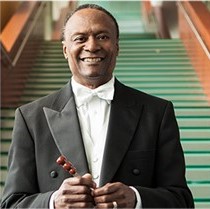 Orchestra conductor Thomas Alphonso Wilkins was born on September 10, 1956, in Norfolk, Virginia, the son of Wallace Y. Wilkins Sr. In 1962 he began school at the city’s segregated Young Park Elementary School. When he was in the third grade, he was introduced to classical music during a school field trip to the Norfolk Arena Theater to see a performance of the Norfolk Symphony Orchestra. Wilkins became thrilled watching the conductor lead the musicians and merge their sounds. As a fourth grader, he began playing the violin in the school orchestra, and in high school, he played cello in the orchestra and tuba in the marching band.

On June 14, 1985, Wilkins and Sheri-Lee, a physical therapist, married. They are the parents of twin daughters – Erica, Nicole.

After graduating, Wilkins led the Northwest Indiana Youth Orchestra until 1995. From 1995 to 2002, Wilkins served as resident conductor of The Florida Symphony Orchestra. However, during that period, he also led the Detroit Symphony Orchestra. In 2005, Wilkins accepted the position of music director of the Omaha Symphony.

The Boston Globe named Wilkins among the “Best People and Ideas of 2011.” He also received the prestigious Outstanding Artist award at the 2014 Nebraska Governor’s Arts Awards for his significant contribution to music in the state.

During the 2016-17 season, Wilkins was the guest conductor for The Philadelphia Orchestra and The Cleveland Orchestra. That same season he was invited to conduct other orchestras, including the New York Philharmonic, Atlanta Symphony, Rochester Philharmonic, Cincinnati Symphony, Dallas Symphony, and National Symphony. That summer, he directed Chicago’s Grant Park Music Festival in Chicago.

In 2018 Wilkins received the Leonard Bernstein Lifetime Achievement Award for the Elevation of Music in Society conferred by Boston’s Longy School of Music in 2018. The following year, 2019, the Virginia Symphony bestowed upon him their annual “Dreamer Award.” The latter award recognizes Hampton Roads residents who embody characteristics of Dr. Martin Luther King Jr.

For the 2020-21 season, Wilkins was music director of the Omaha Symphony. In addition, he was the principal conductor of the Hollywood Bowl Orchestra and held the Germeshausen Family and Youth Concert Conductor Chair with the Boston Symphony.

Since 2017 Wilkins has been the Henry A. Upper Chair of Orchestral Conducting and professor of music in orchestral conducting at the Indiana University Jacobs School of Music, He is also chair of the board for the Raymond James Charitable Endowment Fund and national ambassador for the non-profit World Pediatric Project, headquartered in Richmond, Virginia.