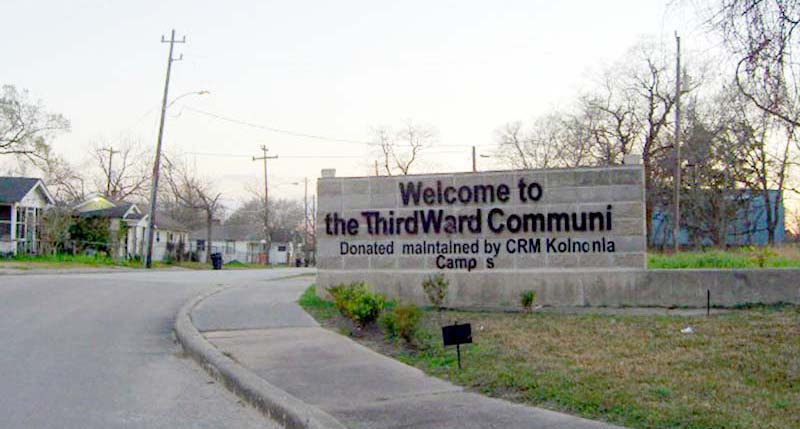 In 1837, Houston, Texas was incorporated and divided into four wards. The Southeast ward was named Third Ward and over time this area became an important center of African American-owned businesses and a hub for black culture.

Third Ward originally comprised the area east of Main Street and south of Congress Street. After the Civil War ended former slaves from the areas surrounding Houston began to move into Third Ward.  At the time, African Americans were forced to live on the outskirts of the ward but as whites moved to the suburbs, blacks began to purchase property in the heart of the ward. In 1872, influential African Americans led by Reverend John Henry “Jack” Yates raised $8,000 to purchase four acres of land which would become Emancipation Park, the first park for black Houstonians and home to the annual Juneteenth Celebration commemorating the liberation of African Americans from slavery in Texas.

Between 1910 and 1930 the African American population in the Third Ward exploded from 22,929 to 66,357. As a result of the rapid population growth, African American owned businesses increased along Dowling Street, which became the area’s main business corridor.

Dowling Street also became the center of Houston’s blues movement. Blues clubs were lined up and down the street and became places where artists from throughout the South and Southwest went to experiment and perfect their craft. The Eldorado Ballroom the self-styled “Home of the Happy Feet,” was the premier venue featuring artist like Ray Charles, and B.B. King, as well as local artist Illinois Jacquet, Arnett Cobb, and Jewel Brown.  African Americans came from all over East Texas to frequent the nightlife in Third Ward to have a fun night, allowing them a brief release from the everyday realities of the Jim Crow South.

The Third Ward was also home to other community landmarks such as Jack Yates High School, the second African American high school in Houston, the Covington House which served as Houston’s unofficial guest quarters for many prominent African American visitors, the Shape Community Center and Riverside Hospital, the first non-profit hospital for African Americans in Houston. Texas Southern University, founded in 1947, was the largest institution in the ward.

As African Americans left the South for better opportunities in the North in the first half of the 20th century, the Houston Chamber of Commerce, unlike most white urban leaders in the South, took out advertisements for “Heavenly Houston,” hoping to lure blacks to the city.  By the early 1950s, however, wealthy and middle-class blacks started leaving the Third Ward as they integrated formerly all-white residential areas. That outward migration continued through the 1960s and 1970s and now included business departures.  Those businesses that remained of the began to fail, leaving Third Ward a shell of its former prominence.

Today there are approximately 33,000 residents remaining in Third Ward and despite the efforts to gentrify the area, residents and community leaders have begun a concerted effort to preserve, protect and celebrate the rich history and heritage of Third Ward.