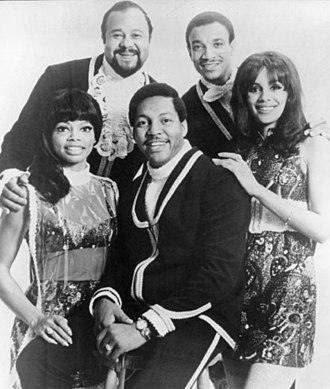 The Fifth Dimension emerged with clean, breezy harmonies in 1965 in Los Angeles, California, as the Versatiles. The group was composed of jazz singer Lamonte McLemore, opera singer Ron Townson, born on January 29, 1933, St. Louis, Missouri, who received the Bachelor of Arts degree from Lincoln University in Missouri in 1955, and R&B singer Billy Davis, Jr., born on June 26, 1938, in St. Louis and graduated from Washington Technical High School in 1957.  Marilyn McCoo, a soprano, born on September 30, 1943, in Jersey City, New Jersey, was invited to join the ensemble in 1965 after receiving a Bachelor of Arts degree from the University of California at Los Angeles earlier that year. Later in 1965 Florence LaRue, a schoolteacher holding a 1964 Bachelor of Arts degree from California State College, Los Angeles was asked to join the group. LaRue was born on February 4, 1942, in Plainfield, New Jersey. All of the Fifth Dimension members were reared in Los Angeles and brought their complementary but differing styles in different genres of music to create the unusual sound of the ensemble.

In 1967, the Fifth Dimension released several singles, including “Go Where You Wanna Go,” which peaked at #16 on the Billboard charts, and “Up Up & Away” from the album Up Up & Away. The latter single peaked at #7 and remaining for 10 weeks at the Top 40. It was a global hit that sold more than 5 million copies. At the 1967 10th Annual Grammy Awards, the quintet was awarded five awards for the song, including Record of the Year, Best Performance by a Vocal Group, Best Contemporary Single, Best Contemporary Group Performance (Vocal or Instrumental), and Best Contemporary Album. They were also nominated for Best New Artist.

In 1968, they recorded and released the single “Stoned Soul Picnic” which peaked at #3 on the pop charts.  The following year, 1969, they released “California Soul” which peaked at #25 on the Billboard charts. The biggest song of their career, “Aquarius/Let the Sunshine” released in 1969, peaked at #1. It remained on top of the charts for six weeks and sold more than three million records.

Marilyn McCoo and Billy Davis were married on July 24, 1969, in Los Angeles, California.

In 1975, the Fifth Dimension released Earthbound, their final album with all of the original members, It peaked at #136 and stayed on the chart for eight weeks. They never again recorded as a group.

Ron Townson died of kidney disease on August 2, 2001, in Las Vegas, Nevada. He was 68. In 2002, the Fifth Dimension was inducted into the Vocal Group Hall of Fame. Billy Davis, Jr. received an honorary doctorate from the University of Maryland Eastern Shore in 2012.