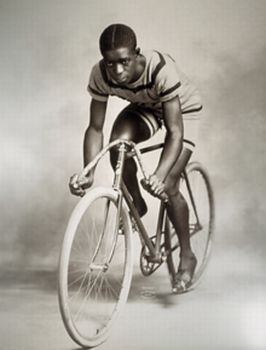 Marshall “Major” Taylor was a late 19th and early 20th century champion cyclist who became the first African American to win a world championship in sprint cycling. Between 1898 and 1899 he set numerous world records in cycling ranging from the quarter-mile to two-mile race.

Taylor was born on November 26, 1878 in Indianapolis, Indiana to Gilbert Taylor, a Civil War veteran and Saphronia Kelter Taylor. His parents migrated to Indianapolis from Louisville, Kentucky. His father worked as a carriage driver for a wealthy white family name the Southards in Indianapolis. Young Taylor accompanied father to work and became friends with the family son, Dan Southard.

In 1892, the Southards moved to Chicago, Illinois, leaving Taylor with a bicycle. Despite their move they soon recognized him as having a natural talent for riding a bicycle. By 1892 fourteen-year-old Taylor worked in an Indianapolis bicycle shop performing stunts for the customers He likely gained the nickname “Major” because he often wore a military uniform while doing his stunts.

Taylor won a number of races in Indianapolis and Chicago, Illinois by the time he was fifteen years old including his first significant cycling competition on June 30, 1895 when he became the only rider to finish a 75-mile road race near Indianapolis. On July 4, 1895 he won a ten-mile race in Indianapolis.

Because of the racism directed toward him in the Midwest, Taylor in 1895 moved to Worchester, Massachusetts, which was also the center of the U.S. bicycle industry. Taylor won amateur contests in Massachusetts, New Jersey, New York, and Connecticut before turning professional in 1896 at the age of 18 and becoming an overnight sensation. His first professional race too place on December 5, 1896 in front of 5,000 spectators at New York City’s Madison Square Garden. Despite his success and growing fame, many local promoters refused to allow Taylor to compete because of his race.

In 1897 and 1898 because Taylor was not allowed to compete because of racial discrimination, he was prevented from winning the American sprint championships. However, in 1899, after setting a number of world records, Taylor won the World Sprint Championship in Montreal, Quebec, Canada. This achievement made him only the second black athlete to hold a title in any sport. (The first was bantamweight boxer George Dixon, who won the title fights in 1890-91).

In 1901, Taylor had an exceptional European tour, where he defeated every European champion who challenged him. He raced for five seasons in Paris, France and two seasons in Australia. Retiring from racing in 1910 and settling in Worcester, Massachusetts, Taylor was characterized as “the fastest bicycle rider in the world.”

Taylor was married to Daisy Victoria Morris in 1902. The couple had one daughter, Rita Sidney, before separating in 1930. Little is known about Taylor after the separation and his move to Chicago.

Marshall W. Taylor died on June 21, 1932 in Chicago, Illinois at Cook County Hospital.  He was 53 at the time of his death, impoverished and was buried in an unmarked grave. In 1948, a group of pro bike racers with money donated by Frank Schwinn of the Schwinn Bicycle Co. had his remains exhumed and reburied at Mount Glenwood Cemetery in Glenwood, Illinois.

During the 1980s, Taylor was inducted into the United States Bicycling Hall of Fame. The city of Indianapolis also built the Major Taylor Velodrome name after him and he was awarded the Korbal Lifetime Achievement Award by USA Cycling. The city of Worcester, Massachusetts created a statue outside the city library.