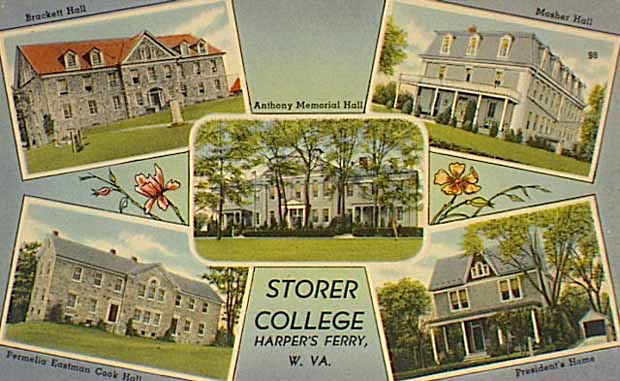 Storer College was created when John Storer, a philanthropist living in Sanford, Maine, approached Rev. Dr. Oren Burbank Cheney, President of Bates College, with a $10,000 gift to found a school which would eventually become a college and would educate students in a southern state, regardless of color or race.  Though Storer was agreeable to opening the school in any southern state, the US Government granted seven acres of Federal land with buildings near Harper’s Ferry, West Virginia.  The school was named Storer and opened in October, 1867 with 19 students.

Storer offered a four-year high school program; a traditional two-year elementary teacher training program; a two-year junior college program; and separate courses focusing on homemaking and agriculture.  The first library had 3,500 volumes and the campus expanded to 30 acres and included a men’s boarding hall, a women’s dormitory, a chapel which included recreation rooms, a printing office, and reading and music rooms.  Storer’s enrollment peaked in 1882-1884 with 288 students.

Despite its small enrollment, the college became identified with major events in African American history.  In 1881, 14 years after Storer’s founding, Frederick Douglass, one of the college’s trustees, delivered a major address on John Brown who was the central figure in the Harper’s Ferry Raid which occurred just miles away in 1859.  In 1905, Dr. W.E.B. DuBois and other leading African American activists created the Niagara Movement at Niagara Falls, Ontario, Canada.  They held their second meeting, however, on the Storer College campus in 1906, giving the small college national prominence.  The Niagara Movement later merged into the larger National Association for the Advancement of Colored People (NAACP).

John Brown’s Fort was moved to the Storer College grounds in 1910, after several relocations.  The Fort was originally the fire engine house of the US Armory where John Brown and his men retreated before the US Marines under the command of Robert E. Lee defeated them in October 1859.  The building was dismantled and became part of a display at the Chicago World’s Columbian Exhibition.  Journalist and actress Kate Field raised money to move the Fort back to West Virginia.  Storer alumni placed a plaque in front of the structure which read: “That this nation might have a new birth of freedom, that slavery should be removed forever from American soil, John Brown and his men gave their lives.”

By that point, however, Storer’s enrollment was dwindling.  Following the 1954 Brown v. Board of Education decision by the US Supreme Court, West Virginia discontinued its funding and the college closed its doors on June 30, 1956.  In 1959 West Virginia Senator Robert C. Byrd sponsored legislation to make Storer’s campus a National Park Service Training Center.  On March 1, 1960, Storer College officially became part of the Harper’s Ferry National Monument.