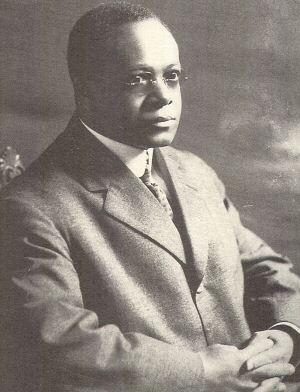 Born in Orangeburg, South Carolina on July 11, 1877, McCants Stewart, the eldest son of the southern black leader, T. McCants Stewart, was molded from childhood by his father for leadership in both his family and in the African American community. McCants spent his formative years in Orangeburg, where his parents taught at Claflin University, an historically black college. From there, he, along with his younger brother Gilchrist, attended Tuskegee Institute. After graduating from Tuskegee, McCants enrolled in the University of Minnesota Law School, where he earned a law degree in 1899. He relocated to Portland, Oregon in 1902, against the advice of his father, where he prepared to practice law.

Oregon’s small African American community prevented McCants from establishing a financially successful legal practice, but he practiced in Portland until 1917. McCants was one of ten cofounders of the Portland Advocate, the city’s second oldest black newspaper. He also lobbied the Oregon legislature in 1916 to repeal unenforced sections of the Oregon constitution that denied the franchise and basic property rights to blacks. In 1917, McCants moved to San Francisco, hoping to improve his faltering legal practice. He formed a partnership with Oscar Hudson, a respected black attorney. But his legal practice did not improve, and on April 14, 1919, Stewart, at the age of forty-one, committed suicide, leaving behind a wife, daughter, and numerous debts. McCants Stewart’s life illustrates the profound difficulties that even professionally trained African Americans had in making a living in the Far West.