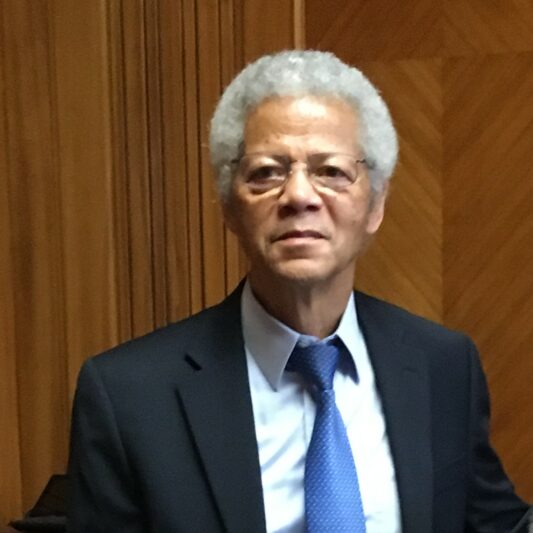 Albert S. Broussard is professor of History at Texas A&M University, where he has taught since 1985. Professor Broussard has published six books, Expectations of Equality: A History of Black Westerners (2012), Black San Francisco: The Struggle for Racial Equality in the West, 1900-1954 (1993), African American Odyssey: The Stewarts, 1853-1963 (1998), American History: The Early Years to 1877, and The American Republic Since 1877, and The American Vision (co-authored with James McPherson, Alan Brinkley, Joyce Appleby, and Donald Ritchie). He is past president of the Oral History Association and a former chair of the Nominating Committee of the Organization of American Historians. He has also served on the nominating committees of the Southern Historical Association, the Oral History Association and the Western History Association. Additionally, Professor Broussard served on the council of the American History Association, Pacific Coast Branch and chair of the W. Turrentine Jackson Book Prize Committee for the Western History Association. In 2006, Broussard served on the Frederick Jackson Turner book prize committee for the Organization of American Historians and has served on the De Santis Book Prize Committee for the Society for Historians of the Gilded Age and Progressive Historians, where he is also a member of the Council. He was the recipient of a distinguished teaching award from Texas A&M University in 1997 and presented the University Distinguished Faculty lecture in 2000. He has served as President of the Society for Historians of the Gilded Age and Progressive Era. In the spring of 2005, Broussard was the Langston Hughes Professor of American Studies at the University of Kansas. Broussard also served three terms on the board of directors of Humanities Texas and as a consultant to the Texas Education Agency. He participates regularly in teacher training workshops sponsored by Humanities Texas and school districts throughout the state of Texas. Broussard is currently writing a history of racial activism and civil rights in the American West from World War II to the present.

In 1619, 12 years after the first permanent English colony was established at Jamestown, Virginia, a small cargo of enslaved Africans arrived at the colony at Comfort Point near present-day Hampton, Virginia. Until recently, historians had misconstrued the circumstances of how this human cargo came … END_OF_DOCUMENT_TOKEN_TO_BE_REPLACED

John Eric Teamer was a gay public high school teacher in Sacramento and San Francisco, California, who emerged as an important community activist in San Francisco and leader in the nationwide LBGTQ community. Teamer was born in Asheville, North Carolina, on April 26, 1941. Beginning … END_OF_DOCUMENT_TOKEN_TO_BE_REPLACED

George Albert Flippin, born in Point Isable, Ohio, in 1868, was a prominent athlete and physician in Nebraska, who broke racial barriers in collegiate football and medicine for African Americans. The product of an interracial marriage, George’s father, Charles Albert Flippin, had served as a … END_OF_DOCUMENT_TOKEN_TO_BE_REPLACED

Robert Browning Flippin was an important community leader and racial activist in San Francisco beginning in the 1930s through the 1950s. He was also the first African American parole officer at the California State Prison at San Quentin. The son of the black physician George … END_OF_DOCUMENT_TOKEN_TO_BE_REPLACED

The black presence in Alaska has been severely under recorded.  This is particularly the case for the role of African American women.  One of the most remarkable black leaders was Blanche Louise Preston McSmith, a native of Marshall, Texas, who, like the majority of African … END_OF_DOCUMENT_TOKEN_TO_BE_REPLACED

Born in 1920 in Hopkinton, Massachusetts, Percy Steele was one of eight children. Steele graduated from North Carolina Central College in Durham, North Carolina, after which he attended Atlanta University, where he completed a Master’s degree. From 1945 to 1946, he was a staff member … END_OF_DOCUMENT_TOKEN_TO_BE_REPLACED

Born in Orangeburg, South Carolina on July 11, 1877, McCants Stewart, the eldest son of the southern black leader, T. McCants Stewart, was molded from childhood by his father for leadership in both his family and in the African American community. McCants spent his formative … END_OF_DOCUMENT_TOKEN_TO_BE_REPLACED

Despite its charm, Hawaii was a peculiar setting for a young black woman from Brooklyn, New York in the late nineteenth century. The third child of T. McCants Stewart and Charlotte Pearl Harris, Carlotta Stewart was born in 1881 in Brooklyn, New York, where she … END_OF_DOCUMENT_TOKEN_TO_BE_REPLACED

Teacher, author, clergyman, and civil rights leader, Thomas McCants Stewart was born in Charleston, South Carolina on December 28, 1853,  to George Gilchrist and Anna Morris Stewart.  Young Stewart attended the Avery Normal Institute before enrolling in Howard University in 1869. Although only fifteen when … END_OF_DOCUMENT_TOKEN_TO_BE_REPLACED