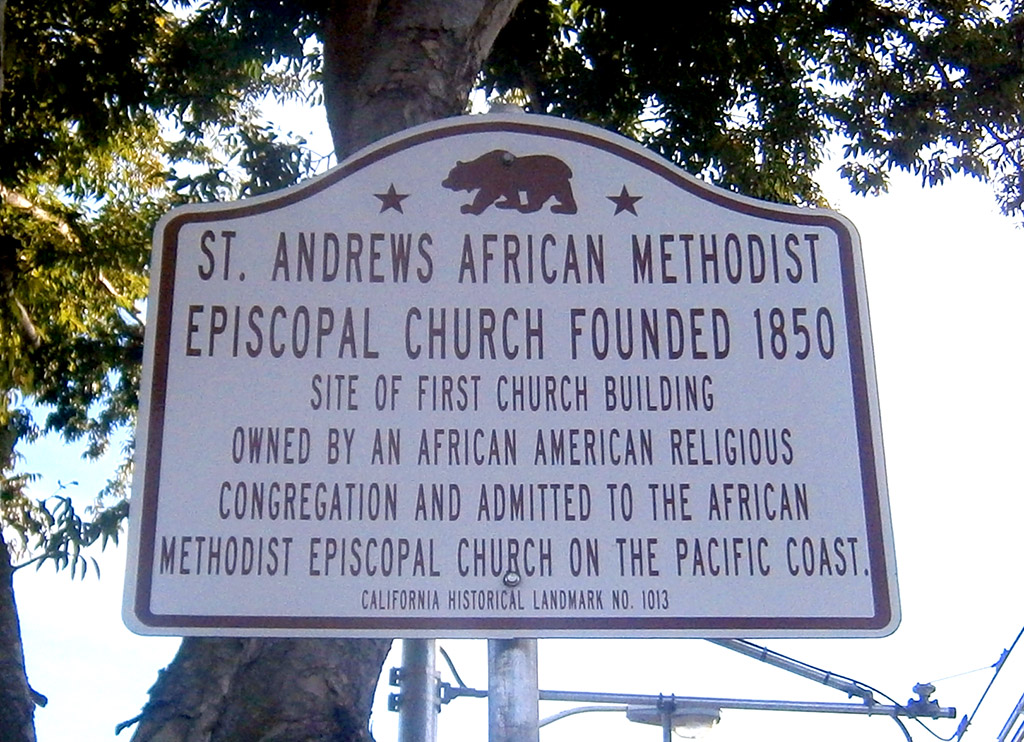 The church began humbly, spurred on by a small group of early black settlers in the Sacramento area who in 1850 gathered at the home of Daniel Blue.   They were led by preacher Barney Fletcher for worship. Later that year the members of the church filed a petition with the Indiana Conference to be officially admitted to the African Methodist Episcopal Conference. The petition was accepted in Indiana which returned a few materials to the new Sacramento church along with a letter of welcome from Rev. W.R. Revels to the fledgling congregation.

St. Andrews’ first pastor was John Fitzgerald. The church was initially known as Bethel AME Church and was admitted to the Indiana conference under that name.  Soon thereafter, however, it became St. Andrews African Methodist Episcopal Church.

For the decade between 1855 and 1865, the church hosted three of the four California Colored Citizen’s Conventions.  These conventions, which included delegates from most of the state’s counties, were organized to illustrate the economic progress black Californians had made during their short residency in the state and to highlight a number of civil rights grievances including the inability of African American males to vote or of any black Californians to give testimony in the state’s courts.  The Conventions met at St. Andrews in 1855, 1856, and 1865.

In 1925, St. Andrews celebrated its Diamond Jubilee. Among those serving as trustees at that time were Julia Brown and Laura C. O’Reilly, the first woman ever elected to a local AME church trustee board in the California Conference.

In 1951 the currently existing church building was constructed in Sacramento, giving the church a permanent home. The old site is now owned by the County of Sacramento and is a parking structure. Nonetheless a historical marker has been placed at the original site of the first church.

Today, St. Andrews AME remains an active congregation lead by Reverend Tyrone Hicks.  It is one of only two AME congregations in Sacramento.  The other, Allen Chapel, is located a few miles to the Northeast.