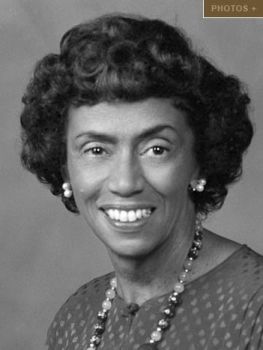 Jewel Plumber Cobb, a cell biologist and cancer researcher, was born in Chicago, Illinois on January 17, 1924 to Frank V. Plummer, a physician, and Carriebel (Cole) Plummer, a physical education teacher. An only child, Jewel Plummer began reading her father’s scientific journals to supplement her science training while in junior high school.  Plummer was a high school honor student where she focused on biology.

Although Plummer began her college career at the University of Michigan in 1942, she left in her sophomore year because of the institution’s practice of requiring all African American students to reside in one house on campus. Plummer completed her B.A. in biology at Talladega College, Alabama in 1947.

Plummer then decided to attend graduate school and applied for a fellowship but was initially rejected by New York University (NYU) because of her race. However she decided to visit the campus where she impressed the biology faculty who granted her the fellowship. Plummer earned an M.S. at NYU in 1947 and Ph.D. in 1950 in cell physiology with a dissertation titled Mechanisms of Pigment Formation. In 1949, while still in graduate school, Cobb was named an independent investigator for the Marine Biological Laboratory at Woods Hole, Massachusetts. She then held prestigious postdoctoral fellowships at the Cancer Research Foundation of Harlem Hospital, Columbia University College of Physicians and Surgeons, and the National Cancer Institute.

In 1954 Jewel Plummer married Roy Cobb, an insurance salesman. They had one son, Jonathon Cobb, who was born in 1957. The couple divorced in 1967.

Jewel Cobb’s research focused on skin cancer and in particular the ability of melanin to protect skin from damage. She also examined how hormones, ultraviolet light, and chemotherapeutic drugs could cause changes in cell division. Much of that work was done while she was on the faculty at the University of Illinois from 1952 to 1954 where she directed the Tissue Culture Laboratory, as well as at New York University from 1956 to 1960, and Sarah Lawrence College between 1960 and 1969.

In 1969, Cobb took the first of several administrative posts. She served as Dean of Arts and Sciences at Connecticut College between 1969 and 1976, where she was also a professor of zoology. From 1976 to 1981 she was a professor of biological sciences and Dean of Douglass College, a women’s college at Rutgers University in New Jersey.

In 1981 Jewel Plumber Cobb became President of California State University, Fullerton.  While at Cal State, Fullerton she led a successful effort to obtain funding for the campus’s new science and engineering building and the new computer science building. She also initiated medical and pre-dental programs for minorities and women in the sciences.

In 1990 Cobb relinquished the Presidency and became a California State University, Los Angeles Trustee Professor. In that capacity she worked with impoverished youth through Southern California Science and Engineering ACCESS Center and Network and the Science Technology Engineering Program (STEP) between 1991 and 2001. She also led California State University’s ASCEND projects promoting careers in science, math, and engineering.  The National Academy of Sciences gave Cobb its 1993 Lifetime Achievement Award for her work promoting the sciences as a career field for youth of color.