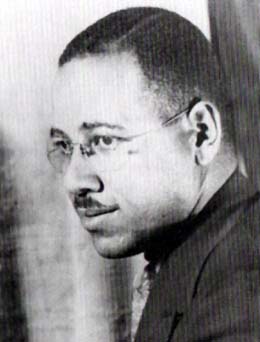 Bernard Squires was the president of the Omaha, Nebraska chapter of the Urban League from 1935 to 1939 and the Seattle chapter of the Urban League from 1939 to 1943. Squires was born in Toledo, Ohio in 1904. He graduated from high school in Toledo, and went on to Ohio State University before graduating in 1930 from the University of Toledo. While at the University of Toledo, he became the first African American to be elected to the student council. Squires went on to graduate study at Western Reserve University, eventually earning bachelor’s and master’s degrees in psychology and sociology.

Growing up, Bernard Squires had seen his father work at a newspaper and as a clerk for the legislature, so he had an early interest in political dealings. After working for several years at various aid agencies in Cleveland, Squires was appointed Executive Secretary of the Omaha Urban League in 1935. As Executive Secretary, in 1939, he attended the National Conference of Social Work in Seattle. His speech at the conference amazed the Seattle members of the Urban League in attendance, and they offered him the Executive Secretary position in Seattle. On June 1, 1939, Squires, his wife Melvina, and three children, moved to Seattle.

At this time, Boeing was rapidly expanding their manufacturing in order to keep up with the demand of the war effort. However, the growing African American population of the region was being discriminated against both by businesses and labor unions, and was not able to take advantage of these opportunities. In 1940, Squires led negotiations with the machinist’s union in an attempt to end their discriminatory practices. Initially, Squires’ entreaty was accepted, but internal squabbling over Communists at the union proved that they had no intention of removing their exclusion of African Americans. Eventually, in 1942, the union relented due to pressure from the federal government and an increased labor shortage.

Bernard Squires also was involved with the National Association for Advancement of Colored People (NAACP) Community Scholarship Fund and the Alpha Phi Alpha fraternity.  He resigned his position with the Seattle Urban League due to ill health, and passed away in 1947 at the age of 42.