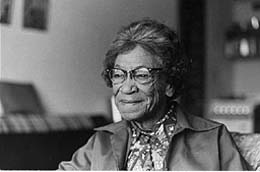 Bertha Pitts Campbell was an early Seattle civil rights worker, a founder of the Christian Friends for Racial Equality, and an early board member of the Seattle Urban League.  She was also one of 22 young women at Howard University in 1913, who founded the Delta Sigma Theta sorority, one of the largest African American sororities.  After moving to Seattle in 1923 from Topeka, Kansas, she observed many discriminatory practices in restaurants, swimming pools, cemeteries and housing.

In 1936, she became the first black woman ever to exercise the right to vote on the local YWCA board and served four terms as chairperson of the East Cherry Branch. In 1942, she and a group of women from the Council of Churches formed the Christian Friends for Racial Equality. This group worked to expand housing and other opportunities for blacks until it disbanded in 1965.

At age 92, Campbell led 10,000 members of her Delta Sigma Theta sorority in a march down Pennsylvania Avenue in Washington, D.C. to commemorate the participation of the organization in the suffrage march of 1913.  The Washington State House of Representatives honored her for her life and work on May 11, 1987. The following month, Seattle proclaimed June 13, 1987, as Bertha Pitts Campbell Day.  On her 100th birthday the King County Council declared it to be Bertha Pitts Campbell Day throughout the county.