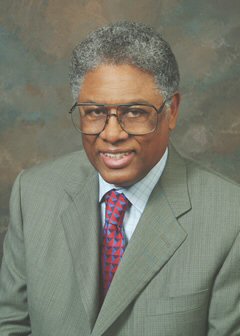 An influential African American economist who is known for his controversial views on race, ethnicity, and socioeconomic status, Thomas Sowell was born in Gastonia, North Carolina in 1930.  When he was eight, his family moved to Harlem, New York.  His father, a construction worker, did not encourage Sowell to pursue higher education even though he showed early signs of academic promise. Sowell dropped out of high school in the tenth grade, worked at various jobs, and obtained a high school degree in an evening program. After two years of service with the U.S. Marines receiving training as a photographer, Sowell entered Howard University in Washington, D.C. where he matriculated for three semesters before transferring to Harvard University. He graduated magna cum laude from Harvard and later earned Master’s and Ph.D. degrees from Columbia University and the University of Chicago (Illinois), respectively. Sowell’s major intellectual mentor at the University of Chicago was Nobel Prize winning conservative economist Milton Friedman.

After receiving the doctoral degree in 1958, Sowell began a university teaching career which included Rutgers, Howard, Cornell, Brandeis, and the University of California at Los Angeles (UCLA).  His positions with government and the private sector included the U.S. Department of Labor, the Urban Institute, and the Hoover Institution.  With the election of Ronald Reagan as President in 1980 Sowell was offered a position with the new administration, which he declined because he felt it would detract from an academic career.  By that point Sowell was the intellectual leader of an emerging group of African American neoconservatives in both government and academic circles.

A prolific scholar, Sowell has written over 25 books.  His earliest work, Economics: Analysis and Issues, appeared in 1971.  His most recent work, A Conflict of Visions, was released in 2007.  Race and Economics, the book that established Sowell’s reputation as a major conservative economist, was published in 1975.  His autobiography, A Personal Odyssey, was released in 2002.   In 1990 Sowell won the Francis Boyer Award from the American Enterprise Institute.  In 2002 he was awarded the National Humanities Medal for innovative scholarship which incorporated history, economics and political science.

Sowell has contributed regularly to scholarly economic journals, as well as numerous newspapers, newsmagazines, and other popular periodicals.  Contending that laissez-faire “free market” policies are more effective in solving economic and social inequality, Sowell has argued for more than three decades that race-based social policies such as affirmative action actually inhibit opportunities for African Americans.  Cultural differences, he concludes, rather than racial discrimination, largely account for differences in socioeconomic advancement among racial groups and thus are the principal cause of inequality.  Thomas Sowell is currently a Rose and Milton Friedman Senior Fellow at the Hoover Institution at Stanford University in California.