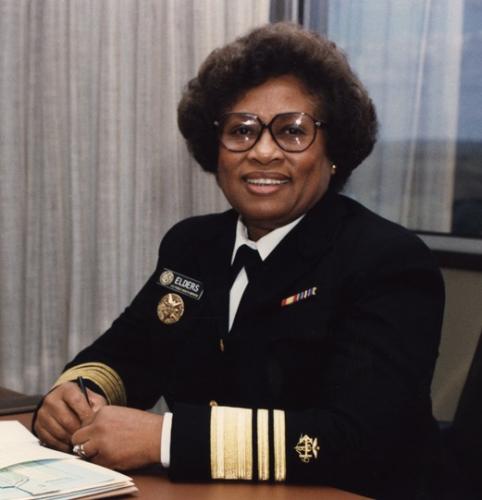 Joycelyn Elders, the former U.S. Surgeon General, was born Minnie Lee Jones in Schaal, Arkansas on August 13, 1933, to Curtis and Hailer Jones; she added the name Joycelyn when she was in college. As the eldest of eight children of sharecroppers, Joycelyn Elders experienced extreme poverty in segregated, rural Arkansas. At age fifteen, Elders earned a scholarship to Philander Smith College in Little Rock, Arkansas. She received a B.S. in biology from Philander Smith in 1952 and an M.D. from the University of Arkansas Medical School in 1960.

Upon graduating from college in 1952, Elders enlisted in the Army and became a physical therapist. After ending her military career in 1956 and enrolling in medical school, Elders returned home and protested against local segregation. In 1957, she refused to park in the back of a drive-in theater.  By 1963, Elders completed her residency and became chief pediatric resident at the University of Arkansas Medical Center. One year later, she was named pediatric research fellow for a three-year term. In 1971, she earned her second master’s degree from the University of Arkansas. Also, from the late l960s to 1987, Elders served the University of Arkansas as an assistant, associate, and full professor. Over this period, she published over 100 articles, primarily regarding juvenile diabetes. In 1987, Arkansas Governor Bill Clinton appointed Elders as the head of the state’s health department. Upon appointment, she became the first female and African American to be director of the Department of Health in Arkansas.

During this period, she increased Arkansas school clinics and expanded sex education. Largely due to Elders’ lobbying, the Arkansas State legislature “mandated a kindergarten-through-twelfth-grade course curriculum encompassing not only sex education, but instruction in hygiene, [and] substance-abuse prevention.” During her tenure, the Arkansas teenage pregnancy rate fell below the national rate.

Dr. Elders remained active in public health policy after her resignation. She worked as special assistant to the intergovernmental affairs director of the U.S. Education Department. Her memberships include: the Academy of Pediatrics, the American Diabetes Association, the American Physical Society, and the American Federation of Clinical Research. She also served as president of both the Southern Society for Pediatric Research and Sigma Xi, a scientific society. Elders was also adjunct professor of pediatrics at George Washington University Medical Center. Her awards include Woman of Distinction Award from Worthen Bank in 1987, and Arkansas Democrat Woman of the Year from Statewide Newspaper in 1988.