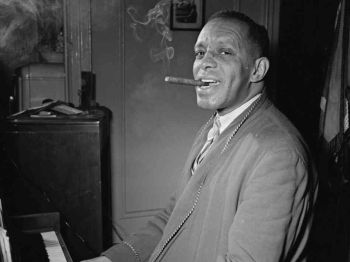 Smith claims to have had his first experience playing the piano at age six. He first learned to play from his mother, his uncle Rob, and teachers in school.  By age 12 he had mastered famous ragtime pieces which he performed in local saloons, dance halls, and theaters.  In his teenage years Smith made money by playing in Newark bars and saloons.  He often danced or played the piano as those who watched put money in his hat.

Smith got his first steady gig at Bill Buss’s saloon playing piano where he performed before saloon audiences during the week but on Thursdays, which were called “maids day off,” he performed for free for domestic servants in the alleyway behind the saloon.  Smith’s popularity grew and he soon had stints at other Newark bars and saloons.  By 1914 he had met and played with two other well-known and influential Newark-based pianists, Charles “Luckey” Roberts and James P. Johnson. Smith, Roberts, Johnson, and a number of other New York area musicians were especially known for a style of ragtime improvisation called “stride piano.”

At the age of 19 Smith enlisted in the US Army in 1916.  The following year he was sent to the front lines in France during World War I.  His bravery in battle won him the nickname “the Lion.” Soon after Smith returned from France in 1919, he became one of the most influential piano players in New York.  Over the next three decades he would mentor other jazz musicians such as Duke Ellington, Bix Beiderbecke, Artie Shaw, the Dorsey Brothers, Count Basie, and Thelonius Monk.  Smith began touring the United States with blues musician Mamie Smith during the 1920s.  He continued his U.S. and European tours throughout the rest of his life.

Besides writing music and performing both in bands and as a soloist in clubs and other venues, Smith appeared in the movie “Jazz Dance” in 1964.  One year later he wrote his autobiography Music on My Mind.  Willie “the Lion” Smith continued to write, produce, and play music into his 70s.  He recorded his last album in Paris in 1972 at the age of 75 before passing away in New York City on April 18, 1973.