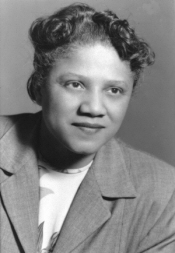 E. June Smith, a prominent leader in Seattle’s civil rights movement, was born in Cairo, Illinois in 1900 and worked as a secretary in St. Louis.  Smith came to Seattle with her husband Roscoe O. Smith, a railroad porter, in 1941.  Soon after her arrival, she worked as an insurance agent and, in 1948, co-founded the Beta Kappa Chapter of Iota Phi Lambda Sorority, a business and professional organization.  Smith became deeply involved in civil rights activities along with Philip Burton, a local attorney who initiated suits against discriminatory practices in the city.  In the late 1950s, she served as a member on the executive committee of the Seattle chapter of the National Association for the Advancement of Colored People (NAACP) and became its president in 1963.  She led the organization for the next five years during the most active period of the local movement, with her home, located on 2310 East Pine, serving as the branch office.

As president of the NAACP and the only female member on the Central Area Civil Rights Committee (CACRC), an organization formed by principal male leaders Edwin T. Pratt of the Seattle Urban League, Rev. Samuel B. McKinney, pastor of Mt. Zion Baptist Church, and Rev. John H. Adams, pastor of First African Methodist Episcopal (A.M.E) Church to be the central voice on civil rights issues, Smith aroused the consciousness of the city through direct action campaigns. Partnering with the Seattle branch of the Congress of Racial Equality (CORE) and CACRC in 1965, Smith organized and led to the King County Courthouse steps a protest march that attracted an interracial group of approximately 600 people.  Here, leaders aired the grievances of African Americans living in the Central Area, a predominantly black residential area of the city.  The marchers targeted discrimination against African Americans in labor unions and housing, sought relief from police abuse, and urged school officials to desegregate the public schools.

During her second term as head of the Seattle NAACP in 1966, Smith directly challenged the Seattle School Board by launching a bold plan to persuade parents and their children to boycott Seattle schools in protest of the slow pace of the School Board’s action on school desegregation.  Smith called on parents to keep their children out of school on March 31 and April 1 to drive attention to the board’s continued segregation of black students.  Uncertain of how many parents would participate in the march, Smith signed up parents to register their children as they arrived for regular school. The two-day boycott commenced as scheduled and demonstrated to the entire city the unity of the black community around the issue of quality education for the Central Area children.

In 1965, Smith helped found the NAACP Credit Union and for the first ten years of its existence served as the treasurer-manager. In 1981, she was honored by the local Seattle section of the National Council of Negro Women (NCNW) who included her in their special exhibit, “Bridging Generations: A Tribute to Black History.”  She was also honored by the NAACP at its regional conference for her 25 years of continuous and distinguished service on the local board.