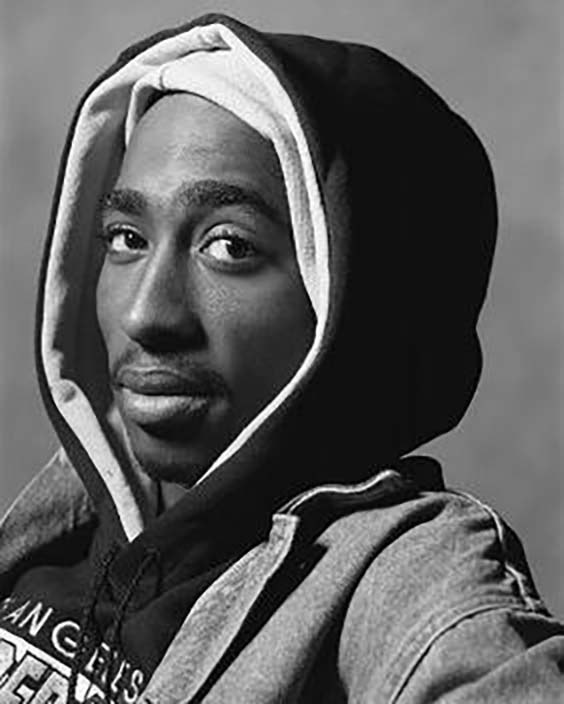 Tupac Shakur, the son of two Black Panther members, William Garland and Afeni Shakur, was born in East Harlem, New York on June 16, 1971, and named after Jose Gabriel Tupac Amaru II, an 18th century political leader in Peru who was executed after leading a rebellion against Spanish rule. Tupac’s parents separated before he was born.  At the age of 12, Shakur performed in A Raisin in the Sun with the 127th Street Ensemble. Afeni and Tupac later moved to Baltimore, Maryland where he entered the prestigious Baltimore School for the Arts as a teenager.  While at the school, he began writing raps and poetry.  He also performed in Shakespearian plays and took a role in The Nutcracker.

In June 1988, Shakur and his family moved to Marin City, California where he joined the Ensemble Theater Company (ETC) to pursue a career in entertainment. Seventeen-year-old Shakur became an avid reader absorbing books such as J.D. Salinger’s Catcher in the Rye, Jamaica Kincaid’s At the Bottom of the River, Herman Melville’s Moby Dick, and the feminist writings of Alice Walker and Robin Morgan.

Shakur’s professional career began in 1991 with his hit single “Same Song.”  Later that year he appeared in Sons of the P, the first of his eight films.  He also recorded his first solo album 2Pacalypse Now.  In 1993, Shakur formed the group Thug Life with a few of his friends and his stepbrother Mopreme Shakur.  The group released their only album, Thug Life: Thug Life Vol 1 on September 26, 1994.  Despite his short five-year professional career (1991-1996) Shakur became the best selling hip-hop artist in the world with over 75 million albums sold including 44 million in the U.S.

Tupac Shakur also gained notoriety for his violent life and his conflicts with the law. In October 1993, in Atlanta, Georgia, Shakur shot two off-duty police officers who he claimed were harassing a black motorist.  The case was dropped when it was disclosed that the officers were intoxicated.  The following year he was convicted of assaulting a former woman employer while on a music video set. The day before the guilty verdict was handed down on December 1, 1994, Shakur was shot five times in a Manhattan recording studio.  Entering the courthouse in a wheelchair, he was sentenced to 15 days in jail with additional days on a highway work crew as community service, and a $2,000 fine. In April, 1996 he served 120 days in jail for violating the terms of his probation.  On September 7, 1996, shortly after attending the Mike Tyson–Bruce Seldon boxing match in Las Vegas, Nevada Shakur was wounded in a drive-by shooting. He died of his wounds six days later at the age of 25.