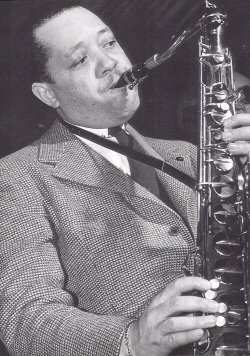 Lester (Willis) Young, known as “Pres,” was born in Woodville, Mississippi and died in New York City. Named Willis Lester at birth, he dropped “Willis” at an early age. Young developed a light tone and swinging style as a member of “territory bands,” such as the Oklahoma City Blue Devils, whose members gave him the nickname “Pres” short for President of the Tenor Saxophone — around 1932. By 1936 he played in Count Basie’s Kansas City band and became one of the leading tenor saxophonists of the swing era. Basie’s orchestra moved to New York City and Young performed and recorded not only with Basie, but also with most of the leading jazz musicians for three decades. Known mainly for his velocity and swinging style with Basie, in 1937 he recorded several ballads with singer Billie Holiday and pianist Teddy Wilson.

After leaving Basie’s band in 1941, he led a combo in New York City, then joined his brother Lee’s band in Los Angeles, and rejoined Basie in 1943. Drafted by the Army in 1944 and, after basic training, he served several months before being judged unfit for combat. After the war he headed a combo and toured with Jazz at the Philharmonic and the Birdland All-Stars. He resided in his Queens home with his wife and family in the 1950s, but then, after suffering from bouts of illness, moved to the Alvin Hotel near Birdland around 1958. Young inspired many imitators, and his sidemen claimed he initiated the “cool” style associated with Miles Davis and others. He also composed instrumentals such as “Lester Leaps In” and “D. B. Blues.” Known for his sartorial splendor, he wore a pork piehat, flat, black, and broad-brimmed that was his trademark, worn long after others considered it out of style. In addition, he spoke a language of his own devising that incorporated slang terms from musicians and the nightclub world — “That’s cool,” “Don’t blow your cool,” and “Have another helping.” (Solo for another chorus.)