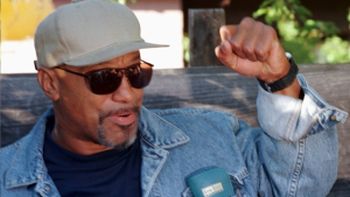 Elmer “Geronimo” Pratt was a high ranking Black Panther Party (BPP) leader in Los Angeles who was targeted by the United States federal government’s domestic surveillance COINTELPRO program. He was accused and convicted of a murder and spent twenty-seven years in prison but the conviction was later vacated and he was released.

Geronimo Pratt was born on September 13, 1947 in Morgan City, Louisiana and had six siblings. His parents, Jack and Eunice Pratt, earned a living by operating a small scrap metal salvaging business. Geronimo was an exceptional student and played quarterback for the high school football team. In 1965, Pratt joined the army and was sent to Vietnam. He served two tours in Vietnam with distinction, earning two Bronze Stars, a Silver Star, and two Purple Hearts. He was honorably discharged in 1968.

Pratt moved to Los Angeles after returning from Vietnam and he enrolled at UCLA using the GI Bill. There he met Alprentice “Bunchy” Carter, who was the leader of the Southern California chapter of the BPP. Pratt joined the BPP and after Carter was murdered in 1969, he was named deputy minister of defense and head of the Los Angeles chapter of the BPP. He became a target of the Federal Bureau of Investigation (FBI) and its counterintelligence, surveillance, and disruption program COINTELPRO. The government accused Pratt of the 1968 murder of Caroline Olsen, a schoolteacher. Olsen had been shot during a robbery in Santa Monica, California. Pratt’s legal defense team included a young Johnnie Cochran. The defense team argued that Pratt was 350 miles away during the time of the murder at a BPP meeting, and Caroline Olsen’s husband, who was also shot but survived, identified another man as the killer. However, Pratt was found guilty, largely based on the witness testimony of Julius “Julio” Butler.

Pratt spent twenty-seven years in prison, eight of those years in solitary confinement. Johnnie Cochran continued to work on his case, and he was joined by a radical law student, Stuart Hanlon. Pratt was granted a new trial in 1996 and was released in 1997, with the judge ruling that the original conviction should be vacated because the Los Angeles district attorney’s office had concealed crucial information from the jury, such as the fact that the key witness for the prosecution, Julio Butler, was a paid FBI and police informant. Pratt also won a civil suit for wrongful imprisonment and was awarded a $4.5 million settlement.

After being released from prison, Pratt dedicated his life to working for those wrongfully incarcerated. He moved to Tanzania with the daughter of Eldridge and Kathleen Cleaver and that is where he passed away on June 2, 2011.