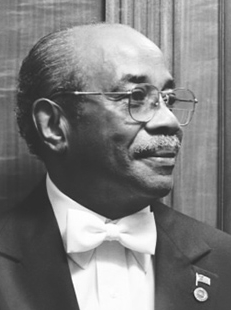 Wilson Roosevelt Jerman was one of the longest-serving White House employees, serving in various positions under eleven U.S. Presidents. Jerman was born on January 21, 1929, in Seaboard, North Carolina, to Theodore Roosevelt Jerman and Alice Plum. The family was poor and although he had no shoes, Jerman walked six miles to attend school in his youth. He dropped out of school after the seventh grade, at age twelve, to help his family and work on a farm. By 1955, Jerman moved to Washington, D.C., and found a job as a caterer, hosting parties in Georgetown. He was invited to come work at the White House by friend Eugene Allen, whose life was the inspiration for the 2013 film The Butler.

Jerman began his career as a Cleaner in the White House, under the administration of President Dwight D. Eisenhower, in 1957. After the election of President John F. Kennedy in 1960, Jerman became a trusted friend of First Lady Jacqueline Kennedy, and took on the job of Doorman. He was soon promoted to Butler, and often watched the Kennedy children, Caroline and John Jr., when the President and First Lady traveled away from their home. Jerman remained a Butler after the assassination of President Kennedy in 1963 in Dallas, Texas.

Jerman’s first wife Glady’s was dying of lupus in 1966 while working under President Lyndon B. Johnson. The President sent his personal doctors to assist in her care, and food from the White House kitchen to the family home in the Petworth section of Washington. During the beginning of the administration of President George Herbert Walker Bush, Jerman helped George Bush Jr., who was having a difficult time adjusting to his new home and surroundings.

Jerman retired from service in 2012. He lastly served as an elevator operator for President Barack Obama. He died at the Sentara Northern Virginia Medical Center, located in Woodbridge, Virginia on May 16, 2020, at the age of 91. His cause of death is listed as COVID-19, the Coronavirus. He leaves behind to mourn his loss four children, twelve grandchildren, and eighteen great grandchildren.

In a public statement, Former First Lady Michelle Obama said “With his kindness and care, Wilson Jerman helped make the White House a home for decades of First Families, including ours. His service to others—his willingness to go above and beyond for the country he loved and all those lives he touched—is a legacy worthy of his generous spirit. We were lucky to have known him. Barack and I send our sincerest love and prayers to his family.”