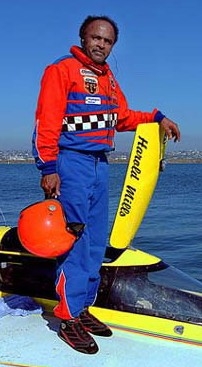 Harold Mills is a boat racing pioneer and award winning driver.  Born August 16, 1953 in Seattle, Washington, he spent nine years in Houston, Texas as a child. He came back to Seattle and grew up as a fan of boat racing.

In the late 1970s, up until 1985, Mills raced his own craft on the local hydroplane circuit. He won his first race in 1985, the Jim Spinner Memorial Regatta at Lake Sammamish outside Redmond, Washington. He retired from driving for the next four years, preferring to promote the sport as an organizer. In 1989, he returned to boat racing as a partner in a 7-litre boat team,  From that point he continued to race through the 1990s.  In 2000, he won 23 of 26 races he entered, driving a 2.5 liter modified hydroplane he called “Fast Freddy.”

Harold Mills has won more than 100 races in his career. In 2001, he moved up to the Unlimited class as the first African American to pilot a turbine-powered unlimited hydroplane.  In 2002 he received the Association For Diversity In Motorsports Trailblazer Award.

Harold Mills is the first African American man to race at Seattle’s Seafair (2004) as well as the first ever black hydroplane national champion of the American Power Boat Racing Association.  Some of his many distinctions include National High Point Champion, George Babcock Driver of The Year, Neal Yapachino Driver of The Day, Sportsman of The Year, City of Seattle Achievement Award from Mayor Paul Schell in 2001. In 2004, he was honored for his accomplishments by the Black Heritage Society of Washington State.

Mills has also held several administrative posts in racing: Commodore of the Seattle Inboard Racing Association (SIRA) twice (1990-1993, 2002); Vice-Commodore between those years; SIRA Board of Trustees Member, race chairman, referee, club treasurer, and turn judge as well as many other duties involved in promoting the sport.