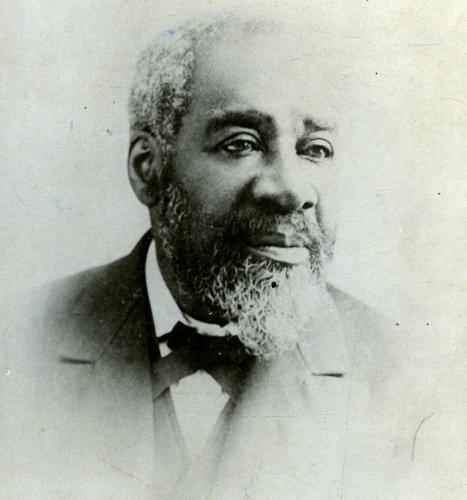 Samuel Harrison, a minister, political activist, and former slave, became one of Berkshire County, Massachusetts’s most ardent abolitionists. Harrison was born enslaved in Philadelphia in 1818 but he and his mother were freed in 1821.  Shortly afterwards the widowed mother and her son moved to New York City. When Harrison was nine years old, he returned to Philadelphia to live with an uncle.

Throughout his childhood, Harrison worked as an apprentice to his uncle in a shoemaking shop, learning a trade that would support him for years. He also attended church services with his mother regularly, and it was during his adolescence that Harrison decided to become a Presbyterian minister.

Samuel Harrison tried hard to educate himself. In 1836, he enrolled in a manual school run by the abolitionist Gerrit Smith in Peterboro, New York. After only a few months, he transferred to the Western Reserve College in Hudson, Ohio (now Case Western Reserve University, in Cleveland, Ohio), an institution known for its abolitionist sympathies.   Financial difficulties, however, forced him to return to Philadelphia in 1839.

Soon after returning to Philadelphia, Harrison married Ellen Rhodes who he had known since the two were children. Over the next twenty years, Ellen gave birth to thirteen children, seven of whom died in early childhood.

In 1850, Harrison moved to Pittsfield, Massachusetts where he was ordained as a preacher by the Berkshire Association of Congregational Ministers and became the first minister of the Second Congregational Church of Pittsfield, the first black church founded in the county.

Harrison settled into his position and became well known in the area for his fiery sermons and outspoken criticism of slavery. He was invited to speak at numerous churches in the region on contemporary political issues, such as blacks serving in the United States Army, war in Eastern Europe, and the history of the city of Pittsfield. In 1862 he lectured a Williamstown, Massachusetts congregation on The Cause and Cure for the War, a fiery oration in which he trumpeted support for enlistment of black troops.

Harrison retired from his Pittsfield pulpit in 1862 and began working with the National Freedmen’s Relief Association to solicit aid for former slaves on the South Carolina Sea Islands. In October 1863 Harrison was appointed chaplain of the 54th Massachusetts Infantry Regiment by Governor John A. Andrew.  Almost immediately he was drawn into the dispute over discriminatory pay to the black soldiers.  Harrison’s demand that he receive the same pay as white chaplains led Governor Andrew and United States Attorney General Edward Bates to write letters to President Abraham Lincoln to end the discriminatory practice.  Lincoln did so in July 1864.  Taken ill in March 1864, Harrison was honorably discharged from the army.

After the Civil War, Harrison ministered to African American congregations in Newport, Rhode Island (1865), Springfield, Massachusetts (1866-1870), and Portland, Maine (1870-1872), before returning to pastor the Second Congregational Church in Pittsfield. Harrison also published a variety of tracts on racial equality, enfranchisement, reconstruction, and “historical perspectives,” including Pittsfield Twenty-five Years Ago (1874), A Centennial Sermon (1876), An Appeal of a Colored Man to His Fellow-Citizens of a Fairer Hue in the United States (1877), Pittsfield Then and Now (1886), and Rev. Samuel Harrison: His Life Story (1899).  Samuel Harrison died in Pittsfield, Massachusetts on August 11, 1900 at the age of 82.