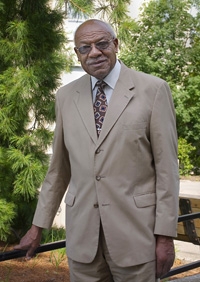 In the article that follows, Richard S. Kirkendall, the Scott and Dorothy Bullitt Professor Emeritus of American History at the University of Washington, Seattle, pays tribute to fellow historian Arvarh E. Strickland.  Kirkendall was chairman of the History Department of the University of Missouri-Columbia in 1969 when Strickland was hired.  He would like to think of himself as the Branch Rickey of the Strickland story, but he cannot make that claim for the whole department participated in the decision.  His tribute to Professor Strickland appears below.

On October 19, 2007, the University of Missouri-Columbia honored a professor by naming the General Classroom Building the Arvarh E. Strickland Hall.  The event recognized Strickland’s large historical significance.  The first African American appointed to that faculty, he is its Jackie Robinson.  Like Robinson, he proved to be a person of strong character as well as large talents.

Joining the Missouri faculty in 1969, Strickland brought to the job diverse experiences in American life.  A native of racially segregated Mississippi, he was born in Hattiesburg on July 6, 1930 and raised mainly by a strong mother and her strong parents.  His father’s alcoholism destroyed the marriage, and his jobs as a plasterer often took him away from the city, but the boy had periodic contact with him and knew other Strickland relatives.

Three black institutions, a Methodist Church, a school, and a college, Tougaloo, near Jackson, Mississippi, also contributed to Arvarh’s early development.  His teachers in Tougaloo’s racially integrated faculty included August Meier, a young Euro-American who would later achieve distinction in the field of African American history.

After graduating from Tougaloo in 1951, Arvarh served for several years as a teacher, a principal, and a supervisor in the segregated Mississippi school system and for another year as a history instructor at Alabama’s Tuskegee Institute.  During this period, he also earned a master’s degree from the University of Illinois, and in 1962, aided by a Woodrow Wilson Fellowship, became one of the first African Americans to obtain a Ph.D. in that university.  Moving farther north in the state, he taught for seven years at Chicago State College, a small teacher-training institution that offered low tuition but did not attract many black students and had only a few African Americans in its faculty.

In recruiting Arvarh Strickland in 1969, the Department of History in Columbia sought primarily to strengthen itself within the historical profession.  It was a time of growth and rising ambitions in higher education; the department participated in the changes, and he represented a field of rising importance in the profession.  Furthermore, he possessed the required credentials: teaching experience, the Ph.D., publications, most notably a book, History of the Chicago Urban League (1966), and strong recommendations from August Meier and other historians.  He joined the faculty as a full professor with tenure.

In 1969, the members of the department gave little if any thought to the possibility that Strickland would become more than a successful historian and professor.  He did satisfy the department’s expectations, establishing Black History as a part of the university’s offerings, participating in both the under graduate and graduate programs, and contributing to the literature of his field.  His publications included the diary of another African American historian, Lorenzo J. Greene, and his work with Carter G. Woodson, “the father of black history.”  Arvarh was also active in and honored by local, state, and national historical organizations.

Strickland’s contributions, however, reached well beyond history.  He promoted the recruitment of black faculty members and administrators, doing so in 1972 as a special assistant to the chancellor on the Columbia campus and, more often, as a consultant to individual departments.  He mentored the recruits, played a large role in the establishment of a Black Studies Program, and inspired minority students.  (The proposal to place his name on a building originated with the Legion of Black Collegians, a student group.)  He was also an administrator, serving a term as chair of the history department, directing the Black Studies Program on two occasions, and holding posts in the central administration of the multi-campus university from 1987 to 1991. Furthermore, Professor Strickland was a force for integration in the United Methodist Church and the city of Columbia, Missouri, home to the University of Missouri.

Clearly, Arvarh had the qualities required to play the Robinson role.  Recently, Robert E. Weems, Jr., one of several African Americans now in the History Department, wrote that it “prides itself on being the academic unit that hired … Strickland” and the “current status of African Americans” in it “can be directly linked to the positive legacy of Arvarh Strickland.”

Arvarh E. Strickland, a member of Alpha Phi Alpha Fraternity, died in Columbia, Missouri on April 30, 2013. He was 82.