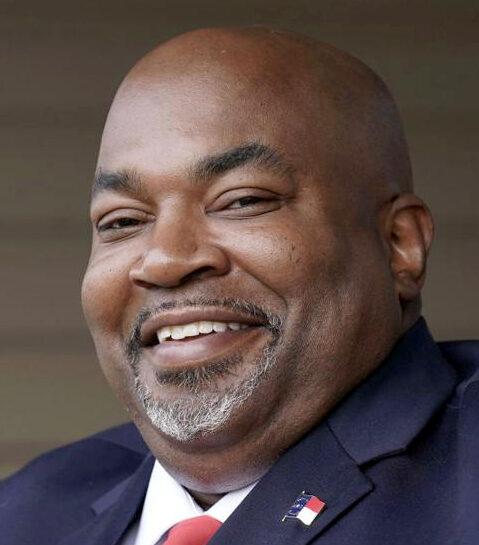 Mark Keith Robinson is the current Lieutenant Governor of North Carolina (NC) and the first African American to hold that position in the state’s history. His public involvement in politics began in 2018, just two years before he was elected to the second highest post in the state.

Robinson was born in Greensboro, NC, the 9th child of 10, on August 8, 1968. His father, an abusive alcoholic, abandoned the family forcing the children into foster care for several years. Reunited with his mother and siblings, Robinson found strength in her as she instilled in him life’s limitless possibilities and a solid faith in Christianity.

In quick succession, Robinson completed high school in 1986, entered the US Army Reserves as a medical specialist, secured a factory job, and matriculated at North Carolina A&T University, graduating from the HCBU in 1990. Three years later he married his wife, Yolanda.

After graduation, Robinson took a job in a furniture factory in Winston-Salem, but when it moved to Mexico, he entered the restaurant industry, rapidly becoming a general manager. After five years, he joined his wife in her day care business. The couple sold that enterprise just before he ran for public office.

Robinson enrolled at the University of North Carolina, Greensboro in 2017, but politics interrupted his studies. In 2018, he came to the attention of North Carolinians through a social media post circulated by then NC Congressman Mark Walker, who broadcast his remarks at an April 2018 Greensboro City Council meeting that took place shortly after the Stoneman Douglas High School mass shooting in Florida. When anti-gun violence activists urged the Council to ban an upcoming gun show at the city-owned Coliseum, Robinson gave an impassioned speech supporting the 2nd amendment. That speech became a YouTube video sensation after being seen more than 500,000 times and gave him widespread recognition and support among conservative NC Republican activists.

Robinson’s position on gun rights mirrored his other conservative views including being pro-life at conception, rejecting the scientific consensus on climate change, and opposition to Gay rights. Like many conservative Republicans in NC and across the nation, he is dismissive of the COVID-19 pandemic and opposes the statewide mask mandate imposed by the Democratic Governor Roy Cooper.

When the 2019 NC Lieutenant Governor’s race began, Robinson’s supporters urged him to enter the contest. His fiery speeches allowed him to defeat a large field of fellow white Republican candidates and to enter the 2020 general election in a state where NC Democrats mounted a strong challenge to President Donald Trump’s reelection bid. Nonetheless Robinson urged his supporters to stand up for law enforcement and called for an amendment to the NC Constitution that would allow all residents to carry a firearm without a license or permit. He won handily in the November 3, 2020 general election against Democratic candidate Yvonne Holley.