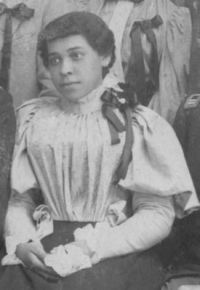 Jennie Hughes Smith was the first African American to graduate from the University of Idaho in 1899. Hughes was born on July 20, 1879 in Washington D.C. to Louisa and Alexander Hughes. Hughes spent the majority of her childhood traveling west with her mother and stepfather Lewis E. Crisemon. The family lived in Pennsylvania and Oklahoma before settling in Moscow, Idaho in the early 1890s. They became one of the earliest black pioneering families in Idaho, joining the small statewide population of just 201 African Americans.

The family built a name and wealth in the city. Hughes’ stepfather opened a successful barbershop while her mother worked as a housekeeper. She attended Moscow public schools as the first and only black student and excelled academically in high school. An 1899 graduate report from the University of Idaho attested that Moscow public schools had prepared her well for college. In 1895, she graduated and became the first black student to matriculate into the University of Idaho.

As a college student, Hughes continued hold a high achieving academic record. In 1898, she won the prestigious Watkins Medal for Oratory against six competitors In 1899, she became the first African American student to graduate, in a graduating class of thirteen students. She received high honors and was awarded the bachelor’s degree in science. During her graduation speech to her classmates, Hughes encouraged her them to “occupy positions of usefulness.”

Shortly after graduating from the University of Idaho, Hughes married George Augustus Smith, a lead miner and prospector in the Silver Valley, on July 6, 1899 at her parents’ home. The couple moved to Wardner, Idaho, a large mining town that had been enveloped in numerous labor conflicts. They lived there for over a decade and had four children. Although Hughes and her husband attained much economic success in Northern Idaho, owning multiple properties, they relocated eighty miles northwest to Spokane, Washington. This was due, in part, to Hughes finding the predominantly white mining towns of Northwest Idaho unsafe for her children. It is also plausible that the family chose to move because of Spokane’s larger black community.

In Spokane, Hughes joined St. John’s Episcopal Church in 1918 and was baptized. She passed on her educational guidance to her children, three of whom graduated from the Spokane area high schools and then attended universities in Washington and Idaho. Her eldest son Berthol followed in her footsteps and enrolled at the University of Idaho, becoming the second African American student to attend the university. He tragically died in 1919 while attending the university as a mining engineering major. Her next eldest son, Leonard, graduated from Gonzaga University and later became an attorney. The youngest son, Ralph, graduated from Washington State College (now Washington State University) in 1935 with a degree in electrical engineering.

On August 19, 1939, Hughes died from unknown causes at the age of 60 and was buried at Riverside Memorial Park in Spokane. According to one record, she left a $21,849.36 estate to her children.

Robert Bruce Slater, “The First Black Graduates of the Nation’s 50 Flagship State Universities,” The Journal of Blacks in Higher Education (Autumn 1996); “Not of Noble Birth: The Triumph of Jennie Hughes Smith,” University of Idaho Special Collections, https://harvester.lib.uidaho.edu/posts/2021/03/01/not-of-noble-birth-the-triumph-of-jennie-hughes-smith.html; Keith C. Petersen, This Crested Hill: An Illustrated History of the University of Idaho (Moscow: University of Idaho Press, 1987).