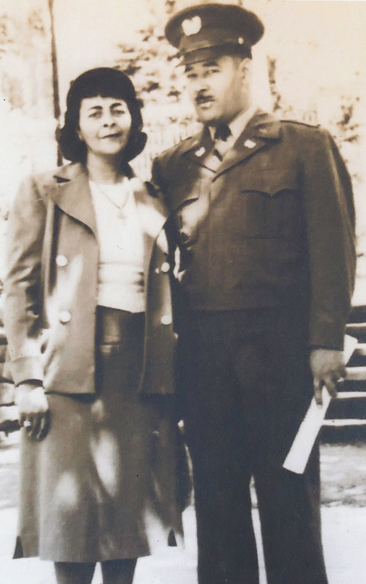 Tireless adoption advocate and civil rights activist Mabel T. Grammer was born on December 23, 1913, in Hot Springs, Arkansas, the granddaughter of slaves and one of the seven children of Pearl and Edward Treadwell. Her father, who worked as a bellhop, died when she was a child and the family slipped into poverty. Tragedy struck again when she contracted peritonitis which led to a ruptured appendix that nearly killed her and left her with scar tissue that precluded ever bearing children.

After graduating with a degree in journalism from Ohio State University she found work at the Baltimore-based Afro-American, writing a column titled “Mabel Alston’s Charm School” from 1938 to 1943. She married her second husband, Army warrant officer Oscar G. Grammer, and followed him to Mannheim, Germany, when he was deployed there in 1950. Returning from an inspirational visit to Our Lady of Lourdes shrine in France, she was approached for help by a number of despairing young German mothers whose children were half-African American, the result of wartime and post-war romances involving these women and African American soldiers. Stigmatized as “mischlingskinder” (a derogatory term for mixed-race children) their biracial offspring, numbering nearly 4,800, faced a daunting future. A black news reporter described the children as “deserted, hungry, born amidst the ruins of Hitler’s Kingdom, hated because of (their) color, dirty for the lack of soap, diseased for the lack of medical attention.”

Grammer responded by founding Children Worldwide Organization, a private adoption agency that operated over a span of 18 years. She believed she could cut through government red tape and place youngsters in homes of Black civilian families in the United States and in Black military families in Germany. That optimism was based on her belief that blacks possessed sufficient racial pride to react favorably to a humanitarian crisis. She was quoted as saying: “I can’t understand why people think it is so strange for a colored couple to adopt these children. Don’t they think we have hearts, too?” To ensure Black Americans were made aware of the crisis she wrote seven articles in the Afro-American publicizing the situation of the children—many of whom were in orphanages—and explained her step-by step “Brown Babies Plan” to place them. The black press in the U.S. supported her efforts.

By the mid-1960s Grammer had assisted in placing 50 Afro-German children in Black homes in the U.S. and an estimated 450 more in the homes of African American military families in Germany. More than a promoter of adoption, she and her husband adopted 12 these children. Not surprising, 10 served in the military and their youngest daughter, Nadja, a graduate of West Point, became a physician and was the Army’s first female three-star general. In 2016 General Nadja Grammer was made the Army’s Surgeon General.

In 1968, three years after moving the family to Washington D.C., Mabel and Oscar were awarded the Papal Humanitarian Award from Pope Paul VI. Oscar died in 1990 and Mabel died twelve years later on June 5, 2002. She was 88. Both are buried in Arlington National Cemetery.