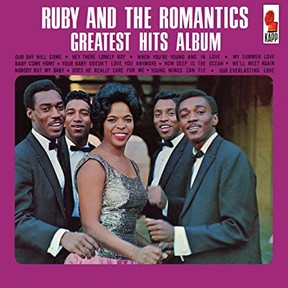 Rhythm and Blues ensemble Ruby & the Romantics began in 1961 when the Supremes, an all-male quartet in Akron, Ohio, and Akronite, an all-female quartet, combined their musical talents. The group included lead singer Ruby Nash Garnett, born on June 15, 1934, to David Nash and Eula Nash. Contralto Garnett, who grew up in Brownleigh Court, a housing project, graduated from Akron’s Central High School in 1952. She joined the Supremes after graduating from high school.

The ensemble played local venues and had limited success in the 1950s. In 1961 they changed their name to the Romantics and signed with Kapp Records. In 1963, the label released what would become their greatest hit, “Our Day Will Come” on the album of the same name. The single peaked at #1 on Billboard Hot 100 and remained there for 15 weeks. It was nominated for Best Rock and Roll Recording at the sixth annual Grammy Awards in 1963. That same year, their single, “My Summer Love,” peaked at #16, “Hey There Lonely Boy,” reached #27, and “Young Wings Can Fly,” peaked at #47. The following year, 1964, “Our Everlasting Love,” rose to #64. In 1965, the last year their records charted, they released, “When Your Young and in Love” which peaked at #48. The second release of the year, “Does He Really Care for Me” only reached #87.”

Ruby Nash married Robert Garnett on October 12, 1966. They have three children, Robert II, Reginald, and Robin. In 1968, Ruby & the Romantics transitioned from an all-male ensemble with a lady to an all-female trio comprising Nash, Cheryl Thomas, and Denise Lewis. That was also the year they released their last album, More Than Yesterday, on the ABC Records label. In 1971 the group disbanded. Sadly, none of the members of the Romantics or their descendants ever received royalties from their hit recordings. Their income came mainly from touring.

The ensemble received a Pioneer Award from the Rhythm and Blues Foundation in 1997 and ten years later Ruby & The Romantics were inducted into the Vocal Group Hall of Fame. In 2013, they were named to the Rhythm and Blues Music Hall of Fame. Also, in that year (2013), the City of Akron declared February 7 as “Ruby & The Romantics Day,” celebrating the 50th anniversary of the release of “Our Day Will Come.”