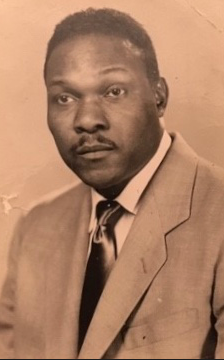 Diplomat, Historian, Poet, Frenise Avedis Logan, Sr. was born September 30, 1920, in Albany, Georgia but grew up in Cleveland, Ohio. Both of his parents were educators and he had one brother. In 1938, Logan enrolled in Fisk University and participated in basketball, tennis, track and field programs. A history major, he pledged Alpha Chi Chapter of Alpha Phi Alpha Fraternity in 1940. Two years later (1942), he received the Bachelor of Arts degree. During this time Logan participated in ROTC and spent his summers as a military reservist.

Upon graduation Logan enlisted in the United States Army in 1942. He also married Mary E. Whitfield from Farmville, North Carolina. They were the parents of two children, Jewel and Frenise Avedis II. While in the Army Logan earned the Master of Arts degree in history for Case Western Reserve University in 1944. Soon afterwards he began working on a Ph.D. degree in history at Case Western Reserve which was completed in 1953. Logan fulfilled his military obligation in 1957 and received an Honorable Discharge at the rank of Captain.

Logan authored numerous articles, reports and poems including “Dixie Hospitality” (1942) that appeared in the National Urban League’s Opportunity: Journal of Negro Life. This poem protested “Jim Crow” in the South. He also wrote the articles, “The Legal Status of Public School Education for Negroes in North Carolina, 1877-1894” in 1955, and “The Economic Status of the Town Negro in Post-Reconstruction North Carolina” published in the North Carolina Historical Review in 1958. His article which outlined the political, economic, and social aspects of Black life during the post-Reconstruction years (1876-1894), received the R.D.W. Connor Award in 1959 for the best article in the North Carolina Historical Review. Logan was the first Black scholar to win the award.

From 1960 to 1961, Logan taught at the Universities of Madras and Calcutta in India as part of the Fulbright U.S. Scholar Program. While there his career as a U.S. Diplomat began when he served as Cultural Affairs attaché coordinating cultural arts operations in Madras and Calcutta. From 1963 to 1964 he served as Cultural Affairs attaché in Bombay and Madras and from 1965 to 1968 he served in the same role in U.S. Embassies in Uganda, Zambia, and Kenya. In 1969 Logan returned to the United States but continued his work with the State Department. Between 1971 and 1972, however, Logan was the Associate Director of the African Art Museum in Washington, D.C.

In 1980, after serving the State Department for two decades, Logan retired. He returned to the academe and resumed teaching history at NCATSU. He remained there until he became ill in 1995.