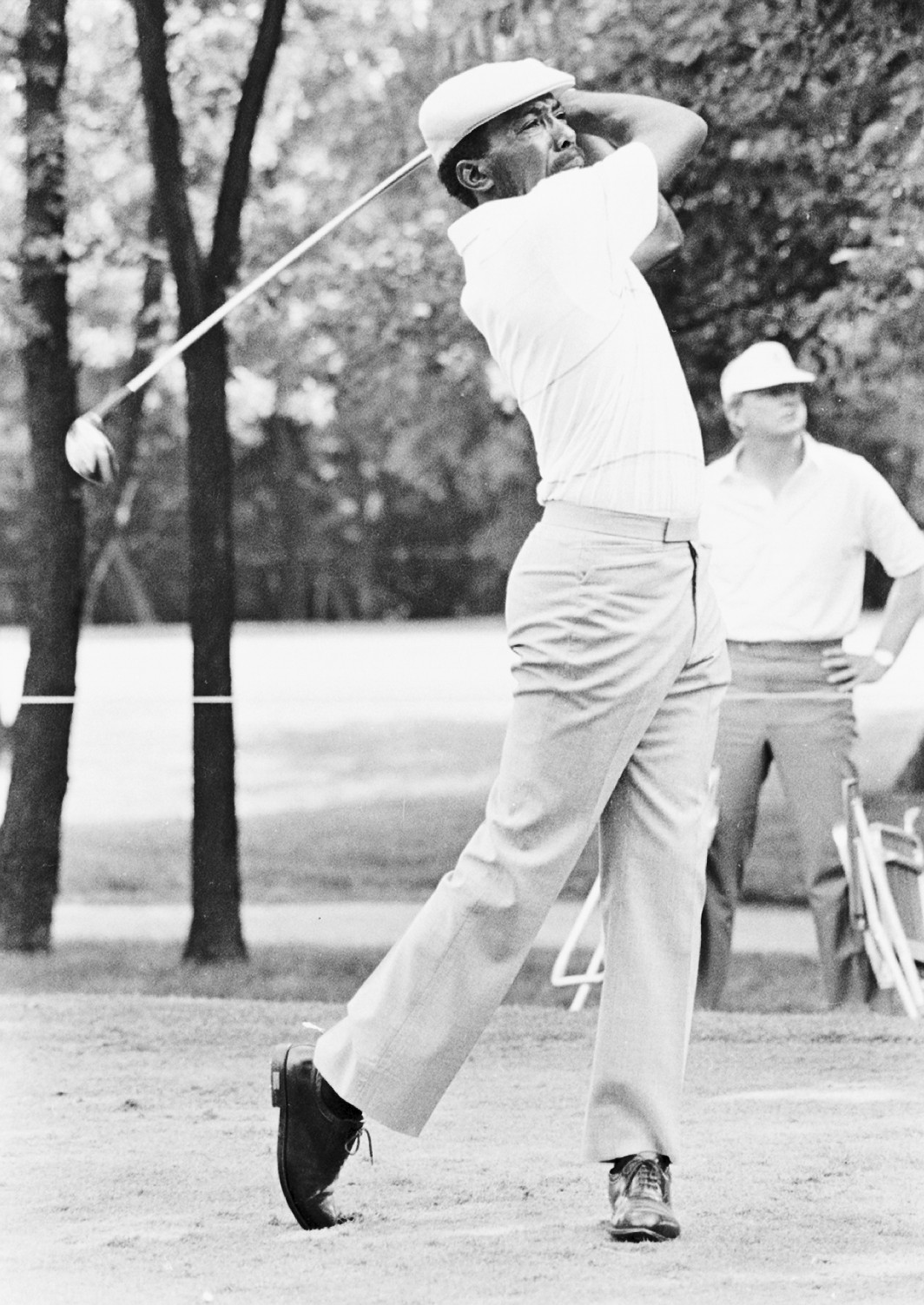 Professional golfer Calvin Peete was born in Detroit, Michigan on July 18, 1943. Toward the end of the 20th Century Peete had become the most successful African American golfer on the PGA Tour, with 12 wins, a record that would be surpassed only by Tiger Woods who turned professional in 1996 at age 20.  In 1983, dubbed “Mr. Accuracy” by fellow golfers for his ability to hit the ball consistently onto the fairway, Peete hit a staggering 84.55 percent of fairways in 87 PGA Tour rounds.

In 1984, he won the Professional Golf Association’s (PGA) “Vardon Trophy,” for PGA Tour leaders with the lowest scoring average.  He was a member of the U.S. Ryder Cup teams in 1983 and 1985 and among the “top 10” in the “Official World Golf Ranking” for several weeks, during the rankings’ 39-week inaugural year, 1986.

Calvin Peete was the eighth of nine children born to Irenna (Bridgeford) Peete and Dennis Peete, a Detroit auto factory worker. A childhood tree-climbing accident left him with a permanently bent left arm. At age 12, he fell from a cherry tree near his grandmother’s house in Haiti, Missouri, breaking his left elbow in three places.  It was set badly and fused permanently.

At 14, Peete moved to Florida with his father, left school, and worked as a farm laborer, picking beans and corn and cutting sugar cane.  The family later moved to upstate New York where Peete as a teenager sold dry goods to migrant workers out of a car. At the age of 23, he was taken to a golf course for the first time.  He quickly learned the game on that public course in Rochester, New York.

Despite his introduction to the sport as a young adult and essentially teaching himself to play, Peete turned professional before he reached 30 and became the fourth African American to win on the PGA Tour, joining Pete Brown, Charlie Sifford, and Lee Elder.

After earning his PGA Tour card in 1975, he went on to win his first tournament, the Milwaukee Open, in 1979.  The following year he qualified for the Masters in Augusta, Georgia and became the first African American to win The Players Championship in Vedra Beach, Florida, five years later.

During his 20-year career on the PGA Tour, Peete finished fourth on the money list in 1982 and had two-win seasons in 1983, ’85, and ’86. His success waned in the 1990s.  Between 1991 and 1995 he appeared in 21 events. His last PGA Tour start came at the 1995 Player’s Championship, ironically the same year that 20 year old Tiger Woods joined the professional ranks.  After retiring from competition in 1995, he continued to play in the Legends of Golf Tournaments until 2009.

Peete and his first wife, Christine, divorced in 1987.  They were the parents of five children: Charlotte, Calvin, Rickie, Dennis, and Kalvanetta Peete.  He and his second wife, Elaine (Pepper) Peete, married in 1993.  They had two daughters: Aisha and Aleya. The family resided in Ponte Vedra Beach, Florida.  Calvin Peete died at 71, of lung cancer, on April 29, 2015, in Atlanta, Georgia.