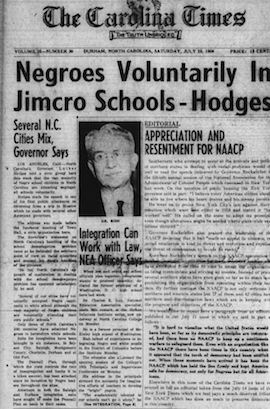 The Pearsall Plan was North Carolina’s response to the 1954 U.S. Supreme Court ruling in Brown v. Board of Education that declared racial segregation in public schools to be unconstitutional. Most southern states, including Alabama, Virginia, and South Carolina, immediately and defiantly resisted the ruling, but North Carolina chose to create a committee to study the issue that was rapidly dividing black and white residents across the state.

In August 1954, Governor William B. Umstead created the Governor’s Special Advisory Committee on Education which would soon be known as the Pearsall Committee after its chairman, Thomas J. Pearsall, a wealthy landowner and former North Carolina Speaker of the House, from Rocky Mount, North Carolina. The committee, which included twelve whites and three blacks, concluded that integration in public schools could not be accomplished and should not be attempted. The committee attempted to delay desegregation by proposing to give local school districts the ability to control the assignment of students to a particular school.

When Governor Umstead died later in 1954, his successor, Luther H. Hodges, also endorsed the committee’s conclusion and delaying action. In 1955 the North Carolina General Assembly reinforced the delaying tactics by enacting the Pupil Assignment Act which ensured local school administrators would have control over pupil assignments.

In April 1956, the Pearsall Committee created the Pearsall Plan which included an amendment to the Compulsory School Attendance Act which excused students who might have to attend a court-ordered integrated public school. The plan also pledged the state to pay, upon special application, private school tuition grants to parents whose children were assigned to integrated public schools.

In July 1956, legislators adopted the Pearsall Plan with only two dissenting votes. Many African American leaders and some whites argued that the Pearsall Plan violated Brown. They noted that because few blacks were allowed to vote in the state, school districts would be pressured mainly by white parents opposed to school integration to maintain racial segregation. On September 8, 1956, voters approved the plan in a statewide referendum by a margin of more than four to one. North Carolina voters chose to uphold racial segregation in the state’s public schools, despite the now two-year-old Brown decision.

In 1957, a year after the Pearsall Plan was passed, the Charlotte School Board, the largest in the state, agreed to enact a voluntary desegregation plan to avoid federally-mandated school integration. Four black students agreed to attend Charlotte’s Harry Harding High School. The students however were harassed by segregationist parents. One of the students, Dorothy Counts, suffered so much abuse that her parents withdrew her from the school. Her departure was soon followed by the other black students. Despite the highly publicized desegregation that year of Little Rock High School by a federal court order reinforced by U.S. soldiers sent to protect the nine students for the entire school year, there was no further attempt to desegregate Charlotte schools for the next nine years.

In 1966 three African American families from Charlotte, North Carolina, represented by civil rights attorney Julius Chambers, challenged the Pearsall Plan in federal court where a three-judge panel declared it unconstitutional. School desegregation in Charlotte, North Carolina, however, wasn’t accomplished until 1971 when the U.S. Supreme Court in Swann v. Charlotte-Mecklenburg Board of Education ordered large scale busing of black and white students in order to end racial segregation in the schools.