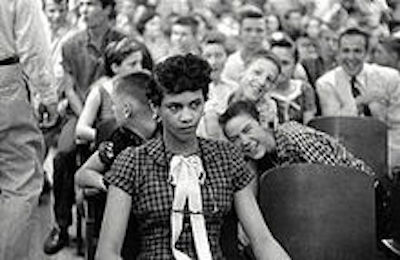 Dorothy Counts was one of the first black students admitted to the Harry Harding High School in Charlotte, North Carolina, as part of the initial effort to desegregate schools in that city. After the four days of harassment by white students that she faced alone, her parents, Dr. and Mrs. Herbert Counts, withdrew her from the school over concern for her safety. When the other three black students withdrew as well, the attempt at desegregation failed.

In 1956 forty black students applied to transfer to white schools across the state, despite the implementation of the Pearsall Plan proposed by the North Carolina Advisory Committee on Education (The Pearsall Committee) to delay desegregation in the state in response to the U.S. Supreme Court’s ruling of racial segregation as unconstitutional in Brown v. Board of Education (1954). Charlotte, North Carolina, since the beginning of the twentieth century, was completely segregated. That segregation included all of its public schools, public accommodations, and neighborhoods. During the summer of 1957, however, the Charlotte School Board agreed to voluntary desegregation to avoid federal- or state-ordered mandates.

On September 4, 1957, Counts, who was fifteen at the time, was one of the four black students who volunteered to be transferred to all-white schools in the district. She was the only black student assigned to Harry Harding High School. On the first day she was scheduled to attend, harassment began. Much of it was orchestrated by leaders of the segregationist White Citizens Council which urged the boys attending the school to block her entry and the girls of the school to spit on her.

Counts walked to the Harding High School through angry crowds who hurled insults, and some threw rocks and others spat on her. More abuse followed when she entered the school on her first day. Trash was thrown at her in the lunch room while teachers ignored the incident. On the second day, two white female students who had befriended her were now subject to harassment as well. Counts’s family also received threatening phone calls. After four days of harassment, her father decided to take her out of the school.

Unlike Little Rock High School in Little Rock, Arkansas, where nine black students integrated the school almost at the same time as Counts, they had entered under a court order and were protected for one year by hundreds of U.S. Army soldiers. Counts, who attended Harding High School alone, received no protection and very little media attention.

Counts’s parents sent her to Philadelphia to continue her education in an integrated school. In 1961 she returned to Charlotte to attend John C. Smith University from which she earned a degree in 1965. Counts then began her professional career in childcare services. She worked in church-based childcare centers that served low-income families. She was also part of a nonprofit organization in Charlotte called Child Care Resources Inc. which advocated for better child care.