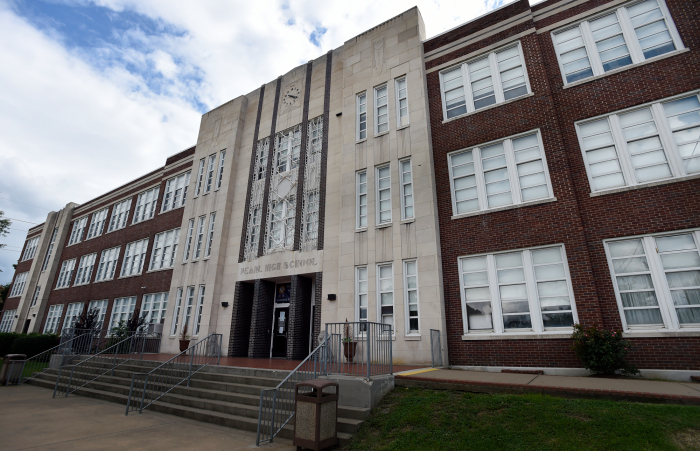 Pearl High School, the most prominent black high school in Nashville, Tennessee, for nearly one century, opened its doors in the fall of 1883 on South Summer Street (now Fifth Avenue South).  The first public school for blacks in Nashville, it was named after Joshua F. Pearl, the city’s first superintendent of public schools. T.W Haley, a white principal, and white teachers directed Pearl (grades one through eight) until 1887, when black teachers were employed.

On September 25, 1884, James C. Napier, the only black city councilman in Nashville, persuaded the council to adopt a resolution to provide high school classes for black Nashvillians. The board of education failed to act on the resolution until 1886 when Mrs. Sandy Porter attempted enroll her son, James Rice Porter, in the all-white public Fogg High School. The city’s refusal to admitted Porter and other black youth to the city’s only high school at that time prompted the black community to hold protest meetings, including one on September 14, 1886, at Clark Chapel Methodist Episcopal Church when those gathered petitioned the board of education to open a high school for African American students.

At the start of the 1897–98 academic year, Meigs’s high school department was transferred to the newly-constructed Pearl High School. On June 2, 1898, Pearl’s first high school class graduated. Around 1916, the mayor and city council authorized the building of a new facility for Pearl High School because of overcrowded conditions. In 1917 Pearl moved to a new three-story structure at Sixteenth North and Grant Street. The school board hired additional teachers, expanded the course of study, and included a twelfth grade. The old Pearl building was eventually renamed Cameron Junior High School in honor of former teacher, H.H Cameron, who died during World War I.

Overcrowding led to the 1936 construction of an even newer high school located at Seventeenth Avenue, North, and Jo Johnston. The new structure was designed by the black architectural firm of McKissack and McKissack. In the fall of 1937, students moved to what many observers considered the most modern, best constructed, and most well-equipped building for black high school students across the South. Other facilities were added to the school: a vocational wing (1945), a stadium (1948), and a gymnasium, cafeteria, and four classrooms (1964). Pearl students won many awards and athletic championships, including the 1966 Tennessee Secondary School Athletic Association (TSSAA) State Basketball Championship.