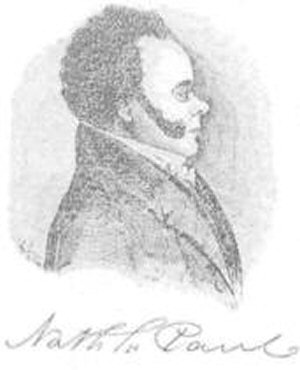 Early 19th Century abolitionist minister Nathaniel Paul was born into a free black family in Exeter, New Hampshire and was one of six Paul sons to enter the Baptist ministry.  His elder brother, Thomas Paul, Sr., was the first pastor of the First African Baptist Church in Boston in 1806.  Shadrach Paul was an itinerant preacher who rode throughout New Hampshire for the Domestic Mission Society.  Benjamin Paul worked alongside Nathaniel as an antislavery agent and minister.  Nathaniel Paul moved to Albany, New York, a way station on the Underground Railroad to Canada, where he served as the first pastor of the Union Street Baptist Church.

A leader in the city’s black community, Rev. Paul participated in a variety of projects designed to improve educational opportunities for blacks in Albany. He was an organizer of the Wilberforce School in Canada, the only school for black youth until 1873, although some blamed him for the financial failure of Wilberforce.  Paul was also a founder and leader of the Union Society of Albany for the Improvement of the Colored People in Morals, Education, and Mechanic Arts.  Paul was also an active abolitionist and a vocal opponent of the colonization movement.  One of his speeches, delivered in New York City in 1829, appeared in the abolitionist journal, The Rights of All.

Several members of the Paul family participated in the abolitionist movement.  Nathaniel Paul’s niece, Susan Paul, was a teacher of black children and an active member of the bi-racial Boston Female Anti-Slavery Society.  His nephew, Thomas Paul, Jr., was the first black graduate of Dartmouth in 1841 and later a leader in the Boston free black community as a school teacher and principal.