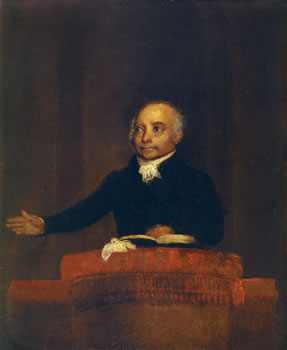 Thomas Paul was the eldest of six sons born into a free Black family in Exeter, New Hampshire.   Educated at a Baptist school in Hollis, New Hampshire, Paul pursued a career in the ministry as did three of his brothers.  He enjoyed a reputation as an eloquent speaker and traveled throughout New England as a guest preacher.  In 1804, he received his ordination.  The following year, he married Catherine Waterhouse and had three children, Ann Catherine, Susan, and Thomas, Jr.

Shortly after moving his family to Boston, Thomas Paul, Sr. was installed as the first pastor of the First African Baptist Church in December in 1806.  He served this congregation until 1829, two years before his death.

Paul was a leader in the movement to establish independent Black churches in the United States.  He assisted the Black Baptists in New York City in the establishment of the African Baptist Society, which later evolved into the Abyssinian Baptist Church.  Paul’s church took on several names between 1806 and the early 1830s, including the Independence Baptist Church, the Abolition Church, and, finally, St. Paul’s.

During his ministerial career, the Rev. Paul also pursued foreign missionary work. In 1815, he traveled to Haiti under the auspices of the Massachusetts Baptist Society, where he stayed for six months.  Unable to communicate in French, Paul met with limited success in his ability to convert Haitians.

Back in Boston, Paul resumed his ministry and his participation in Black Masonic activities. He was chaplain and active member of the African Grand Lodge, no. 459, which later was renamed the Prince Hall Lodge.

Thomas Paul’s brothers, Benjamin and Nathaniel, also Baptist ministers, were actively involved in abolitionist activity, especially in the development of Black communal experiments, notably, the Wilberforce settlement.  His daughter, Susan, was a teacher of Black children and a member of the Boston Female Anti-Slavery Society. Thomas Paul’s son, Thomas, Jr., was the first Black graduate of Dartmouth College in 1841 and went on to a career as a teacher and school principal in Boston.