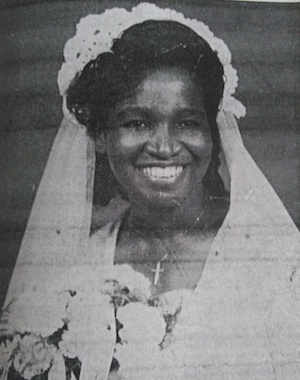 Newspaper columnist and poet Ora Mae Lewis was born March 29, 1918, in New Orleans, Louisiana. Her father, Nathan Leopold Lewis, was a native of Jamaica and a decorated soldier in the British Colonial Army, and her mother Cecelia Della Atkinson, a New Orleans Creole, was a pianist. Cecelia Atkinson died when Ora was seven years old, and her father later re-married. Ora Mae and her siblings lived with her grandmother and great-grandmother. Her parents and grandparents spoke English, French, German, and Creole; however, her father forbade her from speaking anything but the King’s English. Lewis attended New Orleans public schools. Her short story, “The First Christmas,” was published in the New Orleans Times-Picayune, the city’s largest newspaper, when Lewis was nine.

In 1936 Ora Mae Lewis obtained employment on the staff of a black newspaper in New Orleans, The Sepia Socialite, for which she wrote serial stories, short stories, and columns: “Along with Time,” “Downtown,” “Big Sister,” and “News and Comments.” She was with this paper periodically from 1936 to 1941. From July to December 1939, she was also regularly employed on the staff of The Louisiana Weekly where she wrote columns “Socially Speaking” and “The Man on the Street Thinks.” During the summer of 1942, she was employed on the staff of the New Orleans Sentinel where she wrote “Heart to Heart by Cousin Adele,” “Jim Crow Checkerboard,” and “Magazine Page.” She also contributed to The Item Tribune and The Morning Tribune in 1937 and 1938.

Lewis’s writing was both widely praised and feared. “The First Christmas” short story earned her a prize from the Times Picayune in 1927. Her “A Letter to the Archbishop” in the Sepia Socialite on July 23, 1938, was instrumental in ending the segregation of black Catholics during the International Eucharistic Congress in New Orleans that year. Her serial story, “Black Hands and Yellow Cheeks,” published in the Sepia Socialite was literally waved on the floor of the United States Senate by Louisiana Senator Allen Ellender during his tirade against black voting rights in January 1940. He argued that books like Lewis’s work would inspire Louisiana African Americans to register to vote.

Lewis’s writing won a scholarship for her to attend Xavier University in 1936. After writing for local newspapers for several years, she resumed her studies in January 1943 where she majored in English and minored in sociology. Xavier, recognizing her journalist background, made her editor-in-chief of the Xavier Herald. Lewis graduated in 1947 and later earned a Master’s in Guidance & Counseling from Loyola University of New Orleans in May of 1961.

In 1944 Lewis founded Twinkle magazine with her then fiancé, Lawrence Martin. They created the magazine as a source of encouragement for soldiers fighting in the Pacific during World War II. Ora Lewis served as editor of Twinkle until 1949, and Lawrence Martin was the managing editor of the magazine throughout its existence, including when he was stationed in the Pacific. Lewis and Martin were married on June 27, 1946, in New Orleans, and together they had seven children, all of whom attended Loyola University.

In the 1930s, Ora Lewis Martin co-founded the Ninth Ward Voting League with other prominent residents of the Ninth Ward, who would eventually gain key political positions in New Orleans, including Oliver Bush Sr. and David Dennis. In April of 1955, Lewis helped establish George Washington Carver High School and taught there as a guidance counselor for the next several years. For the next half century, Ora Mae Lewis Martin did not write. Then in August 2000, she released SEEDS in the Wind, a Historical Novel (1565-1865) which was her final major work. Ora Mae Lewis Martin died of natural causes on September 28, 2005, in New Orleans. She was eighty-seven.