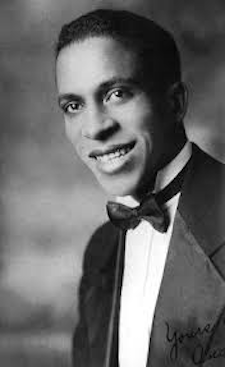 Andy Razaf was a philosopher–poet, composer, and prolific musical lyricist of over five hundred songs, comprising some of the greatest hits from the Tin Pan Alley (New York) era. During his professional lifetime, Razaf worked with composers such as Fats Waller, Eubie Blake, Don Redman, James P. Johnson, Willie “the Lion” Smith, and Harry Brooks. In collaboration with Fats Waller, Razaf wrote the lyrics to some landmark American songs:  “Ain’t Misbehavin,’” “Honeysuckle Rose,” (What Did I Do to Be So) “Black and Blue,” and “The Joint is Jumpin.’”

Razaf’s father, who died during the French invasion of Madagascar before Razaf’s birth, was Henri Razafkeriefo, a royal prince and nephew of Queen Ranavalona III of Imerina. Razaf’s mother, Jennie Maria (Waller) Razafkeriefo, was the daughter of lawyer John Lewis Waller (no relation to Razaf’s frequent collaborator, Fats Waller), the first African American consul to Madagascar. The French colonization of Madagascar forced his widowed, pregnant, teenaged mother to flee to the United States, where in Washington, D.C. on December 16, 1895, Razaf was born with the Malagasy name of Andreamentania Razafkeriefo.

Razaf attended public schools in Harlem and received some private music lessons as well. Growing up in a family that valued poetry, Razaf began writing verses at the tender age of ten. Razaf’s mother worked as a stenographer, and to help her with finances, Razaf left school at age sixteen. Not long after getting a job as an elevator operator at a Tin Pan Alley office building, Razaf, at age seventeen, sold his first professional song, “Baltimo.” Razaf’s early poems (in 1917 and 1918) were published in The Voice, the first New Negro Movement newspaper, edited by Harlem radical Hubert Henry Harrison. By the early 1920s, Razaf was an editor of Negro World, the official newspaper of Marcus Garvey’s Universal Negro Improvement Association, which at the time had the largest circulation of any black newspaper in the world.

During the 1920s and 1930s, Razaf was galvanized to write about racial injustice in America. Music critic and record producer John Henry Hammond II regarded “Black and Blue,” featured in the 1929 Broadway show, Hot Chocolates, to be the first landmark song of racial protest. Razaf had also worked on the original Broadway productions of Keep Shufflin’ in 1928 and Blackbirds of 1930.

“Honeysuckle Rose” was featured in the 1940 movie Tin Pan Alley. While Fats Waller and Razaf were credited for their hit at the end of the movie, in the actual film, white actors were shown writing the song’s music and verse.

In 1951 Razaf suffered a stroke that enervated him for the rest of his life, although he continued to write lyrics, and also occasional columns for social protest publications and black newspapers. Razaf never stopped working for liberal causes.

Razaf married and divorced several times. At age sixty-seven, he married for the fourth time, successfully that time.

In 1972 Razaf was honored by his Tin Pan Alley peers in the Songwriters Hall of Fame. He did not live long enough to see how his lyric talent was instrumental in the success of several Broadway hits that paid tribute to early twentieth century black musicians: Bubbling Brown Sugar (1976), Ain’t Misbehavin’ (1978), Eubie (1979), and Black and Blue (1989). Bobby Short championed Razaf’s work in a 1988 Atlantic label album entitled Guess Who’s in Town – Bobby Short Performs the Songs of Andy Razaf.  In 2001 the Recording Industry Association of America (RIAA) selected Ain’t Misbehavin’ as one of 365 Songs of the Century.

On February 3, 1973, Andy Razaf died of kidney failure at Riverside Hospital in North Hollywood, California. He was 77.