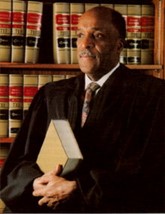 The Honorable Nathaniel Raphael Jones was an African American attorney, judge, and law professor. His indelible contributions and steadfast commitment to equality for all under the law’s eyes have since resulted in tremendous progress for persons of color in the United States and abroad.

Nathaniel R. Jones was born in Youngstown, Ohio on May 12, 1926, to Nathaniel Bacon and Lillian Jones. His father worked in the steel mills, and his mother worked in several positions including most notably as subscription manager for J. Maynard Dickerson, a well-known NAACP activist, Black attorney, and founder of the African American newspaper The Buckeye Review. Attorney Dickerson would later play a role in Judge Jones’ life as an important mentor.

Jones graduated from South High School in Youngstown in 1945. During his teenage years, he was a budding activist, proudly and actively involved in his local youth NAACP branch. Shortly after graduation, he served in the U.S. Army Air Corps in 1945 during World War II. After he completed service, with the financial assistance of the GI Bill, Judge Jones attended Youngstown College (Youngstown State University), where he graduated with a Bachelor of Arts degree in 1951. During his college years he continued his early activist, working with the local NAACP. He continued his early activism in college and was active in the NAACP. Jones entered the Youngstown State Law school in 1953 and graduated with a J.D. degree in 1956.

In 1961, Jones was appointed by President John F. Kennedy as the first African American Assistant U.S. Attorney for the North District of Ohio. In 1967 he was named Assistant General Counsel for President Lyndon Johnson’s Kerner Commission which investigated racial violence across the United States. He continued his legal work advocating against racial discrimination and was appointed General Counsel for NAACP in 1969. For over a decade working as General Counsel, he fought to end segregation and promote affirmative action in schools.

In 1979, Jones was appointed a Federal Judge for the 6th Circuit Court of Appeals by President Jimmy Carter. In 1994, he gave counsel to the drafters of the new Constitution for South Africa after the system of Apartheid ended.

Outside his work as a judge and attorney, Judge Jones was a law professor at numerous law schools, including Harvard Law. He served in multiple leadership positions, including honorary co-chair and director of the National Underground Railroad Freedom Center in Cincinnati.

Judge Jones retired in 2002. In 2016, he published his autobiography, Answering the Call: An Autobiography of the Modern Struggle to End Racial Discrimination in America. He was also the author of several law journal articles and he received numerous awards and over 19 honorary degrees.

Judge Nathaniel R. Jones passed away on January 26, 2020 at the age of 93. He was preceded in death by his late wife, Lilian Hawthorne, and is survived by his daughter Stephanie, stepdaughter Pamela Velez, stepsons Marc, Rick, and William Hawthorne, and eight grandchildren.