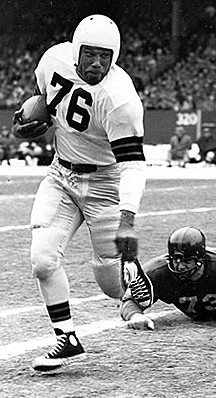 Marion Motley was born June 5, 1920, in Leesburg, Georgia. Motley played football at Canton McKinley High School in Canton, Ohio, and went on to South Carolina State University and then to the University of Nevada, where he played football while participating in other collegiate sports such as track, throwing javelin, and boxing.

Joining the Navy during World War II, Motley played football at the Great Lakes Naval Training Center for future Cleveland Browns coach Paul Brown. While in the Navy, the 6’1’’, 235 lb. fullback would regularly race Grover Klemmer, the world record-holder in the 440 yd. dash. In 1946 Brown called Motley and asked him to try out for his professional team in the new All-America Football Conference (AAFC). That year Motley, along with three other players, became the first African American to play professional football in the modern era.

In four seasons in the AAFC Motley and the Browns were unstoppable, amassing a 47-4-3 regular season record and winning every championship. Motley’s greatness at fullback came from his combination of daunting size and remarkable quickness, and his ability as a pass-blocker. A punishing hitter, Motley also played linebacker at many points during his career. He is the AAFC’s all-time leading rusher.

In 1950 the Cleveland Browns joined the National Football League.  Motley led the league in rushing and was named to the All-NFL team in his first season. In one game that season, Motley ran for over 180 yards on just 11 carries, and he still holds the NFL record in rushing for an entire season with fewer than 140 attempts.

In nine seasons as a professional fullback, Motley gained 4,720 yards on 828 carries for an astounding 5.7 yards per carry average. He was the first African American elected to the Pro Football Hall of Fame in 1968 and in 1994 was honored on the NFL’s 75th Anniversary All-Time Team.  Marion Motley died on Motley died on June 27, 1999. He was 79 years old.