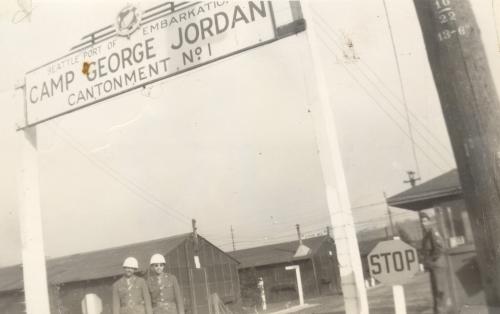 Camp George Jordan was a United States Army facility established in Seattle, Washington, during World War II.  It was generally known as a Black army camp, because it was segregated in such a way that the African Americans were housed on one side of the street – referred to as “Camp Jordan proper”, and the white personnel on the other side.  It was located on the south side of Spokane Street between 1st and 2nd Avenues.

Originally referred to as the First Avenue Camp, Camp Jordan was established by the U.S. Army’s Port of Embarkation Administration in July 1942.  It was eventually operated as a trucking company to transport troops to and from Fort Lawton and Fort Lewis to the ships for overseas duty.

In November 1943, the First Avenue Camp was officially named in honor of a member of the 9th U. S. Cavalry (“Buffalo Soldiers”), Sergeant George Jordan, an African-American recipient of the Congressional Medal of Honor “in recognition of his valor and bravery above and beyond the call of duty” at the Battle of Tularosa in New Mexico in 1880.

Camp Jordan remained an active facility throughout World War II until it was declared surplus in March 1947.