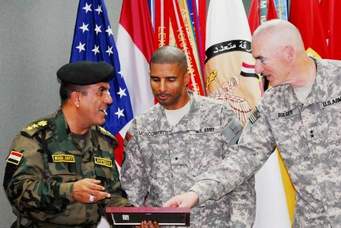 Owen Monconduit is a retired brigadier general in the United States Army, who in 2009 became the first African American to be promoted to the rank of general in the Louisiana National Guard.

Monconduit, a native of Pineville, Louisiana, joined the National Guard in 1980 as part of the Reserve Officer Training Corps (ROTC) at Louisiana State University. He was commissioned as a second lieutenant on May 20, 1983, and received a bachelor’s degree in engineering technology the following year. Monconduit served with the 769th Engineer Battalion in Gonzales, Louisiana, and ultimately become the commander of a company. He served in that capacity until 1991, when he took a position with regional command.

Monconduit remained with regional command, where he worked as chief of environment management, until 2000. Having attained the rank of major, he joined the 529th Engineer Battalion in Monroe, Louisiana. Monconduit was promoted to lieutenant colonel in 2000 and named commander in 2001. In March of 2004, Monconduit’s battalion was assigned to Afghanistan and completed a year-long combat tour during the War on Terror. Upon his return to the United States, Monconduit was assigned to assist in the aftermath of Hurricane Katrina.

Monconduit was promoted to colonel in 2006, and was the executive officer of Adjutant General Bennett C. Landreneau. In 2007, he became commander of the 225th Engineer Battalion, stationed at Camp Beauregard, a few miles outside his hometown of Pineville. In 2008, Monconduit went on a second combat tour, this time in Iraq during the Iraq War.

On January 28, 2009, Monconduit was promoted to brigadier general, and was officially decorated while serving in Baghdad, Iraq on February 17. He thus became the first African American to be promoted to the rank of general in the three hundred-year history of the Louisiana National Guard.

Monconduit retired shortly after returning from Iraq in 2010, ending a military career of more than thirty years and over a dozen decorations. In 2017, he worked with the New Orleans Sewerage & Water Board in an emergency capacity to address engineering issues in the wake of impending hurricanes.

In addition to his bachelor’s degree, Monconduit also earned a master’s in organizational management from the University of Phoenix in Arizona in 1998, and another in strategic studies from the U.S. Army War College in 2007. He resides in Pineville, Louisiana, with his wife, Agnes.