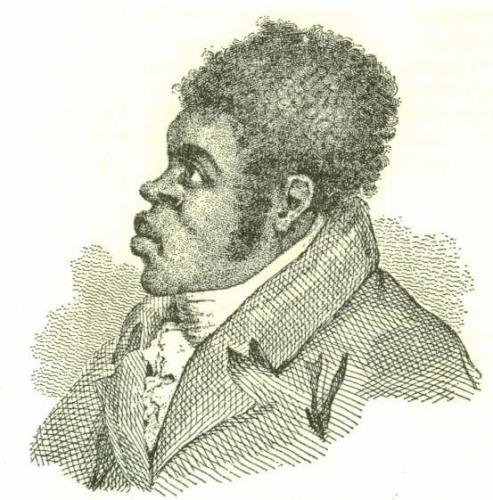 By all rights Thomas Molyneux should have become recognized as the first world boxing champion from the United States. Born in 1784 to parents enslaved by a wealthy Virginian plantation owner named Molyneux, Tom, because of his size and strength, was selected to engage in prizefighting matches with enslaved men from neighboring estates, a practice common during that era.  Often planters bet substantial sums of money on the outcome. Tom ultimately participated in a match involving a wager of $100,000.  When he won, his grateful owner granted him his freedom and a present of $500.

Molyneux moved to New York where he engaged in a number of successful prizefights.  His victories allowed him to proclaim himself the Champion of America in 1809. That same year he sailed to England to challenge Tom Cribb, generally recognized as the Champion of the World.

On a bitterly cold and windy day on December 18, 1810, Molyneux met Cribb for the championship. In the 28th round Tom appeared to knock out Cribb, but when Cribb was unable to respond, his seconds rushed across the ring and complained that Molyneux had been hiding lead bullets in his fists. While Molyneux and his supporters spent time disproving the accusation, Cribb recovered and was allowed to continue. In the 31st round, Molyneux’s head struck a stake in the ground, when he tripped over Cribb after throwing him to the ground. Semi-conscious and unable to defend himself in the 33rd round, Molyneux fell to the ground and announced he could fight no more in a bout that would go down as one of the most unfairly contested championship bouts in England’s history.

A return bout between the two men took place on September 28, 1811, but Cribb knocked out a poorly conditioned Molyneux in the 9th round to retain his title. Tom Molyneux’s boxing career came to an end in 1815 when he lost to George Cooper. He died penniless in Galway, Ireland on August 4, 1818.