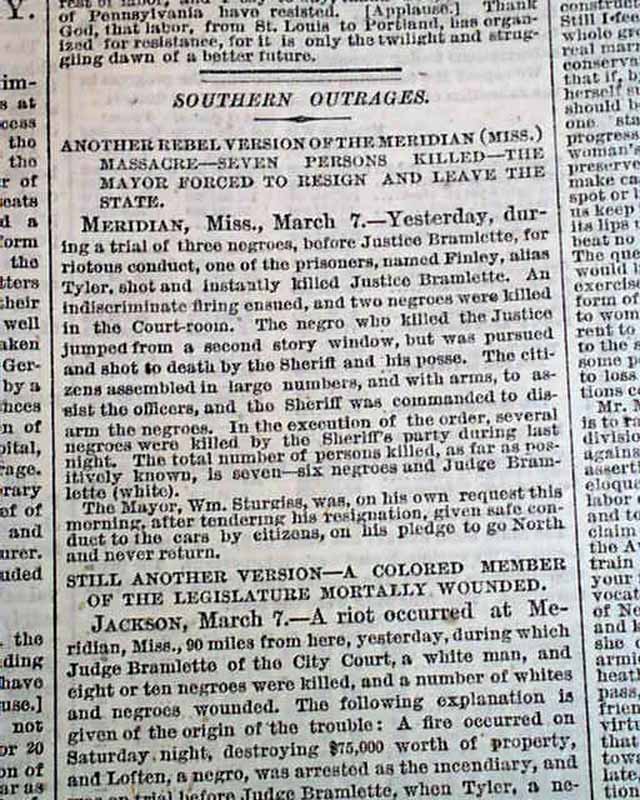 Newspaper Account of the Meridian Riot
Fair use image

The Meridian Race Riot occurred over three days in March 1871 in Meridian, Mississippi.  It resulted in the murders of a white Republican judge and nearly thirty blacks by a mob of vigilante whites led by the Ku Klux Klan. The riot is the bloodiest day in the city’s history since the Civil War.

Racial tensions had been brewing in Meridian for some time as white Democrats resented the growing political power of the newly freed blacks and the growing number of white Republican northerners in the region who were sympathetic to the black cause.  In February 1871,  Daniel Price, a white Republican teacher at an all-black school in Meridian, was arrested after he disguised himself as a Klansmen and assaulted a bounty hunter from Alabama who had come to illegally arrest black workers accused of breaking their labor contracts and fleeing to Meridian.  Price was arrested and charged under the anti-KKK legislation with assault while disguised.  Ironically, the law had never been used to actually prosecute any Klansmen for violence against blacks.  Tensions escalated as a number of armed whites from Alabama arrived in Meridian waiting for Price’s trial.  To avoid violence in the city, the Republican mayor, William Stirgus, made arrangements to drop the charges against Price if he agreed to leave Meridian.

Racial hostilities only intensified as the deaths of four black city officeholders and other black Meridian residents went unpunished.  After Mayor Stirgus’ request for federal troops to help end the violence was denied and he began pressing charges against whites accused of those crimes, prominent Democrats petitioned for the mayor to be removed from office.  The Saturday prior to the riot, a public meeting to support Mayor Stirgus and to ease racial tensions was held on the steps of the Lauderdale County Courthouse in Meridian.  To help calm the fears of the black residents, black Republican leaders J. Aaron Moore, William Clopton, and Warren Tyler, along with Mayor Stirgus, urged their black supporters to remain calm and not retaliate with violence.  After the public meeting, a store owned by the Mayor’s brother was set on fire; the fire spread, burning nearly two-thirds of the downtown area before it was extinguished.  Although it was not clear what caused the fire, a rumor spread that blacks would burn the entire city that night.  A mob of angry whites led a search for Moore, Clopton, and Tyler, who were all arrested and charged with arson and inciting a riot.

Two days later on Monday, March 6, 1871, over two hundred blacks and whites—including armed Klansmen—packed the courtroom at the Con Sheehan Courthouse where the black leaders were put on trial. When the trial began, Warren Tyler, one of the accused, interrupted the proceedings to contradict the testimony of a white witness, Jim Brantley, who was on the stand.  Brantley, enraged at being called a liar, grabbed the billy club that belonged to the city marshal and rushed towards Tyler. At that point, the Meridian race riot began. A shootout ensued and the presiding Republican judge and several others in the courtroom were killed.

Tyler escaped the shootout but was later chased down and shot to death by a white mob.  Clopton, who was badly wounded and thrown out of the second floor window of the courthouse during the shootout, died later that night after his throat was cut while he was under the protection of white guards in the sheriff’s office.  Moore escaped to Jackson, Mississippi after being chased by a white mob. For the next two days, the angry mob led by the Klan terrorized the citizens of Meridian and killed nearly thirty other blacks. Mayor Stirgus, who went into hiding, was forced to resign his seat and flee the city.

The state of Mississippi as well as the U.S. Congress investigated the riot, but no one was ever convicted of a crime. Fearing for their own safety, hundreds of blacks left Meridian.  As there was no criminal action taken against anyone in the Meridian race riot, racial violence, led by the Klan, spread throughout the South.