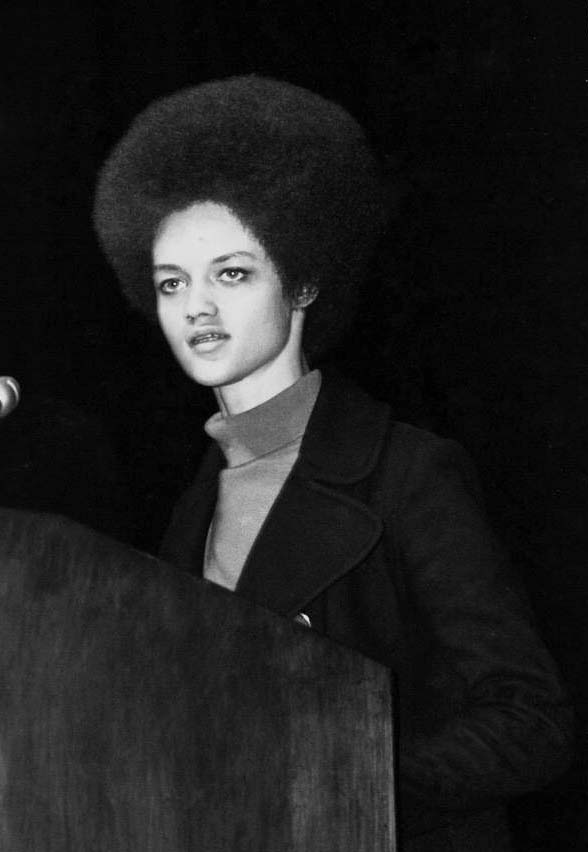 Kathleen Neal Cleaver emerged in the late 1960s as one of the most influential leaders of the Black Panther Party (BPP).  Neal was born in Memphis, Texas on May 13, 1945. Her father Ernest Neal was a sociology professor at Wiley College. Her mother, Juette (Johnson) Neal, earned a master’s degree in mathematics. When Neal was a child, her father accepted a job as the Director of the Rural Life Council at Tuskegee University in Alabama. Six years later, her father joined the Foreign Service and the Neal family moved overseas. They lived in India, the Philippines, Liberia, and Sierra Leone. The family returned to the United States after the death of Neal’s brother from leukemia. Neal relocated to Pennsylvania, and graduated with honors in 1963 from the George School, near Philadelphia.

Neal then attended Oberlin College, and later Barnard College. She left Barnard in 1966 to relocate to New York and work with the Student Nonviolent Coordinating Committee (SNCC). Neal organized a student conference at Fisk University in 1967.  There she met Eldridge Cleaver, Minister of Information for the Black Panther Party. The two quickly fell in love. In November of 1967, Neal moved to San Francisco, California to become the Communications Secretary for the Panthers. Neal and Cleaver were married on December 26, 1967.

The Cleavers were under constant scrutiny because of their membership in the Black Panther Party and were often targets for police intimidation. In 1968, after their home was raided, Eldridge Cleaver organized an ambush in which two Oakland police officers were injured and Panther member Bobby Hutton was killed. Eldridge was charged with attempted murder. He made bail and left the country, first heading to Cuba, and then on to Algeria. Kathleen Cleaver reunited with her husband in Algeria, and in a few months later gave birth to their son Maceo. While on a visit to North Korea, Kathleen Cleaver gave birth to daughter, Joju Younghi.

During their time overseas, Eldridge Cleaver clashed with BPP co-founder Huey Newton and the Cleavers in 1971 were banned from the party. They started a new organization called the Revolutionary People’s Communication Network in Algeria. Kathleen Cleaver moved back to New York with her children to promote the organization. She then moved to Paris, France in 1973, and the following year, the French government granted legal residency to the Cleavers.  After only a year, the Cleavers moved back to the United States after living in exile for over 12 years. Eldridge Cleaver was put in jail. Kathleen Cleaver started the Eldridge Cleaver Defense Fund and her husband was freed in 1976. Continuous legal issues and her husband’s changing political views finally caused Kathleen Cleaver to separate from her husband in 1981. The two were divorced in 1987.

Kathleen Cleaver moved to New Haven, Connecticut and enrolled at Yale University, graduating in 1984 Summa Cum Laude with a BA in History. She then enrolled at Yale Law School, graduating in 1989. Cleaver initially worked for the Manhattan law firm of Cravath, Swain & Moore and then taught law at Emory University and the Benjamin N. Cardozo School of Law. Cleaver also worked as a law clerk in the United States Court of Appeals, Third Circuit, and was a senior lecturer at Yale in the African American Studies Department. Cleaver is currently serving as senior lecturer at Emory University School of Law. She has written several books including Memories of Love and War, Liberation, Imagination and the Black Panther Party, and Black Flags and Windmills, and currently lives in New Haven with documentary filmmaker St. Clair Bourne.