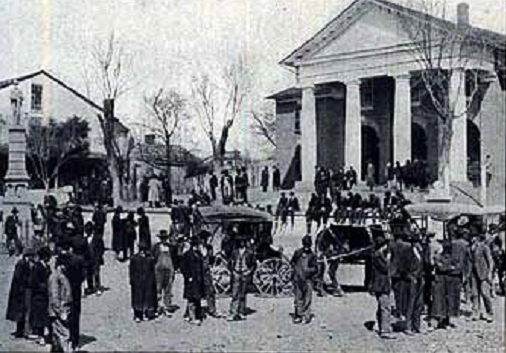 The Carroll County Courthouse Massacre occurred on March 17, 1886 in Carrollton, the county seat of Carroll County, Mississippi.  An incident from earlier in the year led to the bloodshed in March that left twenty-three people dead.

The events leading up to the massacre began in January when brothers Ed and Charley Brown, who were part Native American and black, spilled molasses they were delivering to a saloon on a white man named Robert Moore.  The matter was quickly resolved without incident after Moore confronted the Brown brothers.  The next month, Moore mentioned the incident to his friend James Liddell, a Carrollton attorney and Greenwood newspaper editor, who decided to handle the matter on his own.

On February 12, 1886, Liddell confronted the Brown brothers and accused them of intentionally spilling the molasses on Moore.  An argument ensued, but bystanders intervened before the confrontation became physical.  Later that evening, Liddell confronted the brothers a second time after he heard they were talking negatively about him.  This time, the argument ended with shots fired and all three men wounded, though not seriously.

Though no one knows who fired the first shot, the Brown brothers pressed charges against Liddell for attempted murder. The whites in Carrollton were not pleased that a black person had the audacity to charge a white person with a crime.

On March 17, 1886, the day of the trial, over fifty armed white men stormed the courtroom and opened fire on the Brown brothers and the other blacks in attendance.  Some blacks tried to escape by jumping out the second floor windows but were shot by armed white men waiting outside the courthouse.  Both Brown brothers were killed along with twenty-one other blacks during the massacre.  It is unknown how many others died later from bullet wounds.  All victims of the Carroll County massacre were black; no whites were injured.

No one was ever arrested or charged with the murders.  Mississippi’s governor, Robert Lowry, stated that the “riot” was perpetrated by and was the result of the “conduct of the Negroes.”  People across the United States expressed outrage and demanded an investigation once they read newspaper reports about the atrocity.  However, local or state authorities never conducted an investigation.  President Grover Cleveland also denied a request for federal action from former U.S. Senator Blanche K. Bruce.  Besides newspaper reports, there are few written accounts of the massacre.