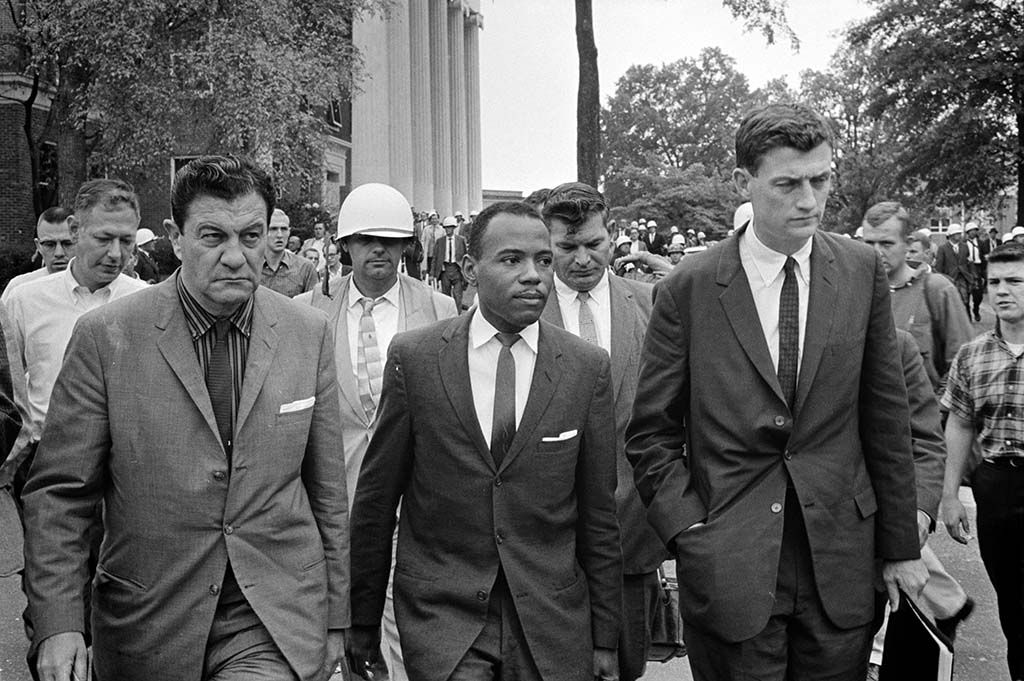 James Meredith is best known as the first African American student to enroll at the University of Mississippi (Old Miss). He was born on June 25, 1933 in Kosciusko, Mississippi, served in the Air Force between 1951 and 1960 and then attended Jackson State University for two years. In 1961 Meredith decided to enroll at the University of Mississippi but was initially denied admission by university officials. He filed a lawsuit charging racial discrimination. After lower courts ruled against him, Meredith’s appeal was upheld by the U.S. Fifth Judicial Circuit Court which, citing the state’s maintenance of a policy of racial segregation, ordered his admission. U.S. Attorney General Robert Kennedy dispatched U.S. Marshals to protect Meredith when state and university officials continued to oppose the court order. His arrival on campus with the Marshals sparked a riot which claimed two lives. Despite the initial opposition Meredith graduated from the University of Mississippi in 1964. His experiences at Old Miss were described in his 1966 book entitled Three Years in Mississippi.

In 1966 Meredith also began a one man protest against racial violence in Mississippi which he called a “Walk Against Fear.” The march originated in Memphis, Tennessee and was scheduled to end in Jackson, the state capital. However Meredith was shot by an unknown assailant shortly after he crossed into Mississippi. Other civil rights organizations, most notably the Southern Christian Leadership Conference, led by Dr. Martin Luther King, and the Student Non-Violent Coordinating Committee, led by Stokely Carmichael, continued the march to Jackson. Meredith recovered from his wounds and rejoined the marchers the day before they reached the state capital.

James Meredith continued his education at the University of Ibadan in Nigeria (1964-65) and at Columbia University (1966-68) where he received an LL.B degree. By the early 1970s Meredith had become an outspoken black conservative. He joined the Republican Party and ran unsuccessfully several times for a congressional seat in Mississippi. Meredith opposed economic sanctions against South Africa and declaring the birthday of Martin Luther King a national holiday. In 1989 he became a member of the staff of North Carolina Senator Jesse Helms. In 1995 Meredith published Mississippi: A Volume of Eleven Books.