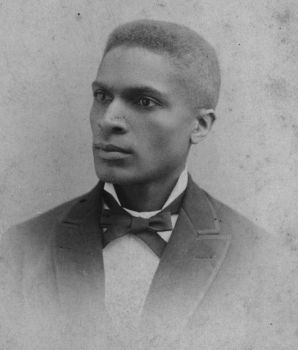 Fredrick McGhee, a founding member of the Niagara Movement, was born into slavery in Mississippi in 1861. He was freed in 1864 as Union forces marched through the northeastern part of the state. McGhee’s parents helped make it possible for him to attend a United Presbyterian Church freemen’s school in Knoxville, Tennessee from which he graduated in 1877. McGhee moved to Chicago, Illinois in 1879, where he worked as a porter while studying for a law degree. Upon completing his law degree in 1885, McGhee quickly entered the upper echelons of black Chicago society.

In 1889, McGhee relocated to St. Paul, Minnesota where he became the first African American lawyer in Minnesota. It was at this time that McGhee began to become disenchanted with the Republican Party, feeling that although most African Americans voted Republican in the late 19th century, the party did little to return the favor. In 1891, McGhee converted from Protestantism to Catholicism, attracted by St. Paul Archbishop John Ireland’s progressive policies towards race.

While working as a criminal defense lawyer in St. Paul, McGhee became increasingly involved in civil rights activism. He participated in several of the Negro Catholic Congresses of the early 1890s, where he pushed for a more aggressive civil rights agenda. In 1896, McGhee gave a St. Paul campaign speech for Democratic Presidential candidate William Jennings Bryan, pointing out various problems in the Republicans’ treatment of African Americans.

In 1898, McGhee formed a civil rights organization called the American Law Enforcement League, whose main goal was to speak out against lynching. That same year also saw McGhee’s participation in the National Afro-American Council (NAAC) as a representative from Minnesota. The council strongly and vocally protested lynching and called for federal support to suppress it in the South.  McGhee met W.E.B. DuBois and Ida B Wells-Barnett at an August 1900 NAAC meeting where he heard them speak.  Two years later he heard Booker T. Washington address the NAAC but was persuaded that the Tuskegee educator and his followers were intent on dominating the organization so that it would not pose a threat to Washington’s competing political strategy.

In 1905, convinced that Washington had completely taken over the NAAC, McGhee, along with DuBois and William Monroe Trotter, and others, broke off and founded the Niagara Movement which would stand in opposition to Washington.  In 1907, the Niagara Movement called for the defeat of Republicans Theodore Roosevelt and William Howard Taft, a decision which showed McGhee’s influence since he was a prominent black Democrat.  The Niagara Movement faded out by 1909 and McGhee became involved in its successor organization, the National Association for the Advancement of Colored People (NAACP).  In one of his last major activities, McGhee helped establish an NAACP branch in St. Paul in 1911.

Frederick McGhee died at the age of 51 in St. Paul in 1912, victim of a blood clot which had migrated to his lung from a bruised or sprained right leg.