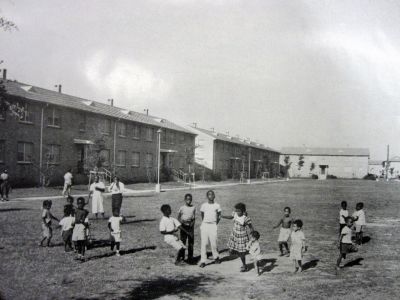 The Desire Housing Project was a Housing Authority of New Orleans (HANO) managed project located in the city’s largely African American Desire neighborhood, part of the Upper Ninth Ward. Authorized by the Housing Act of 1949, construction of the Desire project began in 1949 and was completed by 1956. Cut off from the rest of the city by the Industrial Canal, Florida Canal, and railroad tracks on all four sides, the segregated project contained 262 two-story buildings featuring 1,860 apartments, making it at the time one of the largest public housing sites in the country. By the 1960s, the Desire project housed more than 13,000 residents on a plot of land slightly less than 100 acres in size, making it the area with the greatest population density in New Orleans, Louisiana. Two elementary schools, Robert R. Moton and Johnson Lockett, were included in the construction of the Desire Housing Project. Many of those who moved into the housing project had been displaced by urban renewal projects elsewhere in the city.

Situated on swampland that had formerly been the site of a landfill, the Desire project buildings were poorly constructed – using wood and brick veneer to cut costs – and fell into disrepair within a few years of occupancy. Funding derived from Lyndon Johnson’s War on Poverty programs helped bring in a new community center, pool, daycare center and health clinic.

In September 1965, Hurricane Betsy swept through New Orleans, and the bottom floor apartments within the Desire Housing Project were inundated with floodwater. Wind and water damage destroyed trees and shrubs throughout the project. Little was done by HANO to repair the damage caused by the hurricane.

In 1970, the New Orleans Committee to Combat Fascism (NCCF), a Black Panthers offshoot, moved to the Desire project and began organizing within the community, implementing their free breakfast program, as well as other initiatives. The New Orleans Police Department engaged in two shoot-outs with the NCCF in an effort to purge the group from the neighborhood. Members of the group were later arrested.

A 1971 HANO plan to modernize the project was initiated but eventually deemed too costly. In 1975, HANO used funds from the Department of Housing and Urban Development to perform deferred maintenance and other improvements.

Over the 1970s and 1980s the Desire Housing Project underwent a steady outward migration of residents. Ongoing deterioration of the buildings, as well as a steady increase in crime, contributed to the outflow.

The Desire Housing Project was demolished in stages – 1996, 1998 and 2001 – and a HOPE VI grant was used to build a new mixed-income neighborhood on the former site. Hurricane Katrina destroyed 318 rental units that were being constructed at the time, as well as 107 rental units that had just been finished and occupied.

Kent B. Germany, New Orleans After the Promises: Poverty, Citizenship,
and the Search for the Great Society
(Athens: University of Georgia
Press, 2007); Rachel Breunlin and Helen A. Regis, “Putting the Ninth
Ward on the Map: Race, Place, and Transformation in Desire, New
Orleans,” American Anthropologist 108:4 (December 2006); http://www.datacenterresearch.org/pre-katrina/orleans/7/16/snapshot.html.