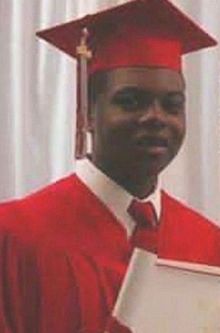 On October 20, 2014, Laquan McDonald, a 17-year-old African American teenager, was shot 16 times within 14 seconds by Jason Van Dyke, a 36-year-old white Chicago, Illinois policeman.  McDonald’s death was another catalyst for the growing national Black Lives Matter Movement.  It also had significant local ramifications including the defeat of Cook County State Attorney Anita Alvarez who in 2016 lost her bid for reelection because of her office’s handling of the shooting.

Laquan McDonald was born on Chicago’s West Side on September 25, 1997, to a teenage mother and an absent father.  Because his mother could not care for him, McDonald lived with relatives and in foster care from the age of three.  He also had learning disabilities and mental health problems.  At the time of his death he was a ward of the state and had multiple juvenile arrests.

Shortly before 10:00 p.m. on October 20, police were called to investigate a report that McDonald was carrying a knife and breaking into vehicles in a trucking yard.  When officers confronted McDonald, who was later found to have PCP in his system, he was running erratically in the street and used his three-inch knife to punch holes in the tire of a police car.  McDonald reportedly refused to obey police commands to drop the knife and officers requested Taser backup.

At that point, Officer Van Dyke arrived, jumped out of his car, and shot McDonald, who fell to the ground.  As McDonald lay on the ground, Van Dyke fired another 15 rounds into him. The Cook Counter Medical Examiner’s autopsy report indicated that nine of the 16 shots hit McDonald in the back. Van Dyke was attempting to reload when other policemen stopped him. Although at least nine other officers were on the scene before Van Dyke arrived, none of them fired their weapons.

The initial police report said that McDonald acted “crazed” and lunged at Van Dyke after refusing to drop his knife. Later police dash-cam footage showed McDonald walking away from Van Dyke and other policemen and that he was not holding the knife in a threatening manner.  That dash-cam footage became available to the public, however, more than thirteen months after the shooting and only due to intense pressure from Brandon Smith, a freelance news journalist and William Calloway, a community activist, who filed for its release under the Freedom of Information Act.

With the release of the dash-cam video, Van Dyke, a 14-year-veteran on the police force but with over 20 citizen complaints for excessive force, was arrested on November 23, 2015, and charged with first-degree murder in the killing of Laquan McDonald. On June 17, 2017, Van Dyke was indicted on 16 counts of aggravated battery with a firearm.  If convicted, Van Dyke faces a prison sentence of 20 years to life.  This was the first time in nearly 35 years that a Chicago police officer was charged with first-degree murder for an on-duty fatality. Ten days later, three Chicago police officers were indicted on charges of obstruction, conspiracy, and misconduct for helping Van Dyke cover up his actions.

The Laquan McDonald killing had ramifications beyond the indictment of Van Dyke and three other Chicago police officers.  In December 2015, the U.S. Justice Department launched an investigation of Chicago police practices partly because of the McDonald killing.  The report, released in early January 2017 was highly critical of the department which agreed to make broad reforms.  However, in February 2017, new Attorney General Jeff Sessions signaled that the Trump administration would not enforce the reforms agreed to by the Chicago Police and Loretta Lynch, his predecessor as Attorney General.

Cook County State’s Attorney Anita Alvarez lost her 2016 reelection bid because of her mishandling of the McDonald case and Chicago Mayor Rahm Emanuel failed to win a majority in his primary reelection bid and was forced into a runoff election against Jesus “Chuy” Garcia, mainly because of criticism of his handling of the McDonald killing.  Emanuel was eventually reelected.

On April 15, 2015, the Chicago City Council approved a $5 million settlement to the McDonald family even though the family had not filed a wrongful death lawsuit.