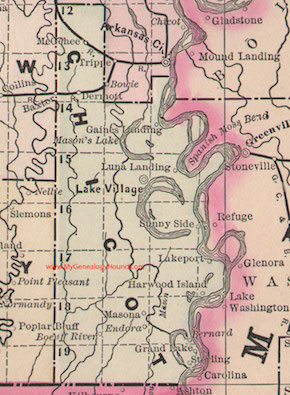 James W. Mason of Chicot County, Arkansas, was the first documented African American postmaster in the United States. Mason also served as a delegate to the 1868 Arkansas constitutional convention and as a state senator.

James Mason was born in Chicot County, Arkansas, in 1841. His father, Elisha Worthington, was a Kentucky-born wealthy landowner and largest slaveholder in the county. Mason’s mother was one of Worthington’s black slaves. Her name is unknown. Mason had a younger sister, Martha, who was born in 1846 and fathered by Worthington.

Mason was sent by Worthington to Oberlin College in Oberlin, Ohio, where he studied from 1855 to 1858. He continued his education in France. When the Civil War broke out in 1861, Mason returned to Chicot County, Arkansas. He and his sister managed Worthington’s Sunnyside Plantation while Worthington resettled in Texas.

Worthington eventually returned to Chicot County after the Civil War ended, but his ill health and economic problems forced him to sell his landholdings in 1867. Later that year, Mason was appointed postmaster at the Sunnyside post office. In November 1867, twenty-six-year-old Mason was elected to serve as a delegate to the Arkansas Constitutional Convention, which convened in January 1868. He later served in the Arkansas Senate during the 1868–69 term.  According to the 1870 census, Mason was a planter who owned real estate valued at $10,000 and personal property valued at $2,000.

Mason married a woman known only as Rachel. The couple had one daughter in 1867 whom they named Fannie Worthington Mason. On March 29, 1870, President Ulysses S. Grant appointed Mason resident minister/consul general to Liberia, a post that would have made him the second black diplomat, after Ebenezer Bassett, to represent the United States abroad.  According to U.S. State Department records, however, Mason never took the position.

Mason continued to be active in local politics. He served in the Arkansas Senate a second time in 1871–1872, and at the same time was the probate judge for Chicot County. During this time, Mason was the central figure in what would be known as the Chicot County Race War of 1871 (also known as the Chicot County Massacre) where a black lawyer named Wathal G. Wynn was murdered by three white men who were arrested and jailed for the crime. The black citizens of Chicot County went to the jail and killed the three men, prompting many of the white citizens to flee the county. Mason, who was Chicot County sheriff from 1872 to 1874, was held responsible for the race war and was indicted by the County Court for instigating the violence.

In the summer of 1873, Sheriff Mason was arrested and charged with murder. He was held in the Drew County jail until the next meeting of the circuit court. Colonel John A. Williams was appointed a special judge in the case, and a grand jury was selected. According to the Arkansas Gazette, local citizens were hopeful a grand jury would punish the parties who were guilty of the murders of the white men during the Chicot County massacre. However, Williams dismissed the grand jury, and Mason was set free.

When Elisha Worthington, Mason’s father, died in 1873, he left no will. Mason and his sister, Martha, filed a court case to receive a portion of Worthington’s estate. They won the case in Chicot County Court, but other heirs of Worthington challenged the decision in a series of appeals that went all the way to the U.S. Supreme Court. The case was settled in 1879, five years after Mason’s death. The Supreme Court ruled that since Worthington had taken Mason to the free state of Ohio to be educated, the relationship between master and slave was dissolved. Mason, who had returned to Arkansas as a free person, was thus eligible to inherit.

James W. Mason died in Chicot County of unknown causes in November 1874. He was thirty-three at the time of his death.